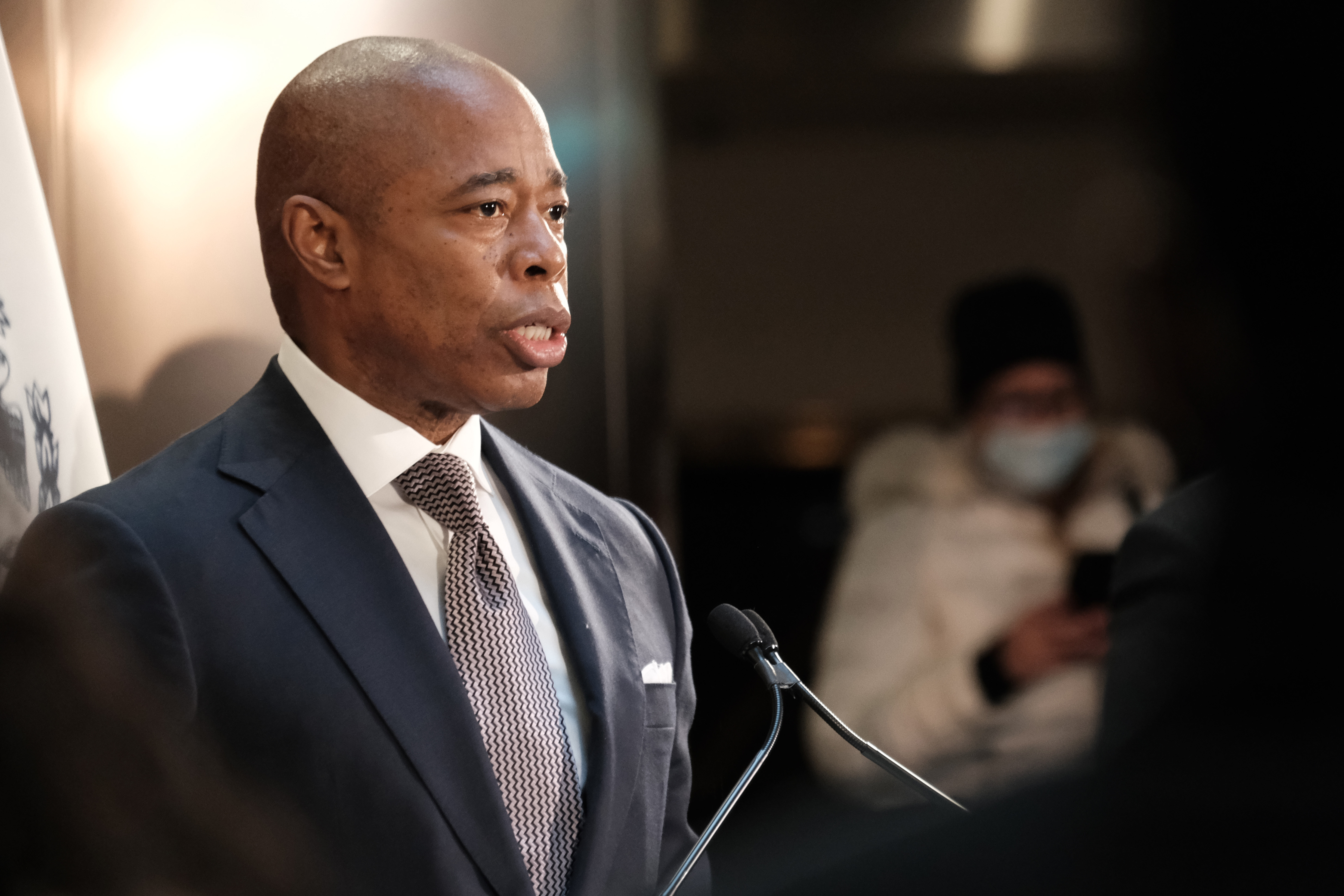 NEW YORK — Most mayors here, buoyed by the international celebrity granted New York City’s chief executive, head to Albany hoping to score big wins with the Legislature, only to return home with their grand plans in tatters.

Eric Adams, with his eight years experience in that very legislative body, was supposed to know better. But as his first session as mayor draws to a close, Adams looks to be treading the same frustrated path back down the Hudson River as his predecessors.

Adams will be left without two of his biggest asks: The Legislature declined to alter laws giving judges more discretion to set bail. And it gave him a two-year extension of mayoral control of city schools — half of the four years Adams sought — while passing legislation mandating smaller class sizes that has raised alarm over costs with the city schools chancellor. Lawmakers also opted to let a controversial tax break dear to New York City developers lapse.

While Team Adams also notched several wins — from funding public housing repairs to securing $4 billion for child care — more than half a dozen lawmakers and legislative aides said in interviews that the city’s high-profile losses were sealed by unrealistic expectations and outreach from the mayor and his team that was too inconsistent and came too late.

For the first-year mayor, who declared himself a new standard-bearer for the Democratic Party, the ability to get what he wants from lawmakers and Gov. Kathy Hochul has the potential to shape his success in coming years and define his tenure as leader of the nation’s most populous city. If history’s any guide, relationships need to be nurtured and egos need to be massaged.

Team Adams was poised to come away with several big victories as Assembly members cast their final votes for session Friday afternoon. Lawmakers signed off on a new ownership structure for the city’s public housing stock — a deal that had eluded Adams’ predecessor.

“Both things can’t be true: the mayor can’t have gotten huge things done on health care and the [city’s housing] trust and all these other issues without there being some sort of constant work going on,” said a person with insight into the negotiations.

The Legislature also granted the city more autonomy over speed cameras and gave the green light to easing the process of converting hotels to housing. Two other bills pushed by the city, one that would expand the pool of minority and women-owned businesses and another that would help more New Yorkers qualify for public assistance, were also headed to the governor’s desk.

“The creation of a NYCHA Trust will funnel billions of dollars to residents for critical repairs. Legislation facilitating the conversion of vacant hotels to housing will deliver much needed relief to our homelessness crisis. And keeping pedestrians on our streets safe and allowing life-saving 24/7 speed cameras is a victory for us all,” Adams said in a statement Friday touting his legislative victories.

Yet for his more politically strenuous requests, Adams didn’t get off to a strong start in Albany. And his ensuing strategy relied heavily on Hochul, a fellow Democrat, and the mutual benefits that each could bring to their predicaments: She could push for city priorities during the budget, and he could offer an endorsement bringing downstate Black support to Hochul’s reelection campaign.

Hochul did help Adams, who has yet to endorse in the governor’s race, score several major wins during the budget season. Albany approved changes to bail laws — but stopped short of including the judicial “dangerousness” standard Adams wanted. The state also granted the mayor two of his campaign pledges: an expansion of the Earned Income Tax Credit and tax incentives to create new child care access for thousands of kids.

But the more controversial issues of mayoral control of schools and the real estate tax break, known as 421-a, were pushed into the subsequent legislative session where the power dynamics are flipped. Without a spending plan to hold over the heads of lawmakers, the governor’s leverage is diminished and the Legislature’s increased.

And that did not bode well for City Hall.

“He hasn’t figured out his groove with the Legislature,” said one person with knowledge of negotiations, speaking on the condition of anonymity to openly discuss the sensitive relationship.

Adams’ years as a state senator make him the first New York City mayor with significant experience as an Albany legislator since Robert F. Wagner, who served three terms in City Hall between 1954 and 1965.

The mayor personally visited Albany twice this year, once in February, a sojourn he blamed the press for mischaracterizing as unsuccessful, and again in May to make a push for school mayoral control just eight scheduled days before session’s end. Throughout the budget process, committee chairs including Assemblymember Steve Cymbrowitz told POLITICO that they were in constant contact with the mayor’s team.

Yet, despite regularly boasting to the New York City press corps about his relationships in the Capitol, high-ranking lawmakers such as Senate Deputy Majority Leader Michael Gianaris and others involved with negotiations said in interviews that outreach from City Hall was spotty or nonexistent on its biggest priorities — none more prominent than mayoral control.

“I think that as a former state senator, he should know that last-minute stuff, yes, it happens, but people need to absorb and to evaluate what they’re voting on — especially when it impacts constituents with major issues: education, housing, health care,” state Sen. Robert Jackson (D-Manhattan) said in an interview, offering Adams advice for next year.

During his mayoral campaign, Adams had said control of the city’s sprawling school system should be revisited every two years. Once in office, the mayor initially asked for a three-year extension before Hochul proposed four years in her executive budget in January — a shifting series of requests one person involved with the talks said muddied negotiations. “I’ve never experienced anything like it,” the person, who also spoke on condition of anonymity for similar reasons, said of City Hall’s back and forth with Albany leaders.

On Thursday, the Legislature passed the two-year extension of mayoral control paired with changes to the city Department of Education’s governing body, along with legislation capping class sizes — a deal panned by Adams at a Manhattan breakfast for city business leaders earlier this week. The time frame on mayoral control was insufficient to implement his policies and the class size bill was a wildly expensive, unfunded mandate, he argued.

That backlash surprised many in the Capitol, including Senate Majority Leader Andrea Stewart-Cousins, who said Adams was aware of the education package before its introduction and did not oppose any of the provisions. But another person with knowledge of the negotiations said the city was unaware of the package until bill language had already been posted publicly.

On Friday, the mayor continued to suggest the program would hurt the city’s pocketbook.

“While there is more work to do to deliver on the priorities New Yorkers are asking for, we are optimistic that there is a way forward on key elements, including ensuring we achieve the shared goal of smaller class sizes without forcing the city into a fiscal crisis and impacting programs for our most vulnerable students,” Adams said in a statement.

State Sen. John Liu (D-Queens), chair of the New York City Education Committee, said in an interview that he was regularly engaged with the mayor and his team on school mayoral control — but their goals were unrealistic.

The effort to renew 421-a, a lucrative development tax break that supporters say is required to spur new housing production in New York City, got off to a slow start after Team Adams chose to prioritize other issues like mayoral control. That left Hochul to pitch a replacement for the program during the budget negotiations earlier this year before the real estate industry opposed cutting a more recent deal with left-leaning lawmakers who wanted to pass a tenant-friendly bill in exchange.

In the final hours of the legislative session on Thursday, even the mayor’s fans struggled to call his presence in Albany a success this year.

Sen. Andrew Gounardes (D-Brooklyn) said that Adams’ office and the mayor himself were in regular contact with him about several items this year such as public housing funding, school control and speed cameras, particularly during the budget. But the mayor was also busy setting up his administration — a task that, when complete, will bode well for a better session next year.

“They haven’t gotten everything they’ve asked for, but that’s just the nature of the process,” Gounardes said. “And that just speaks to the historical tension between Albany and New York City. He’s not the first mayor to have that relationship with Albany, nor will he be the last. So I can understand the frustration. And that’s just a reason to come back next year and try even harder.”