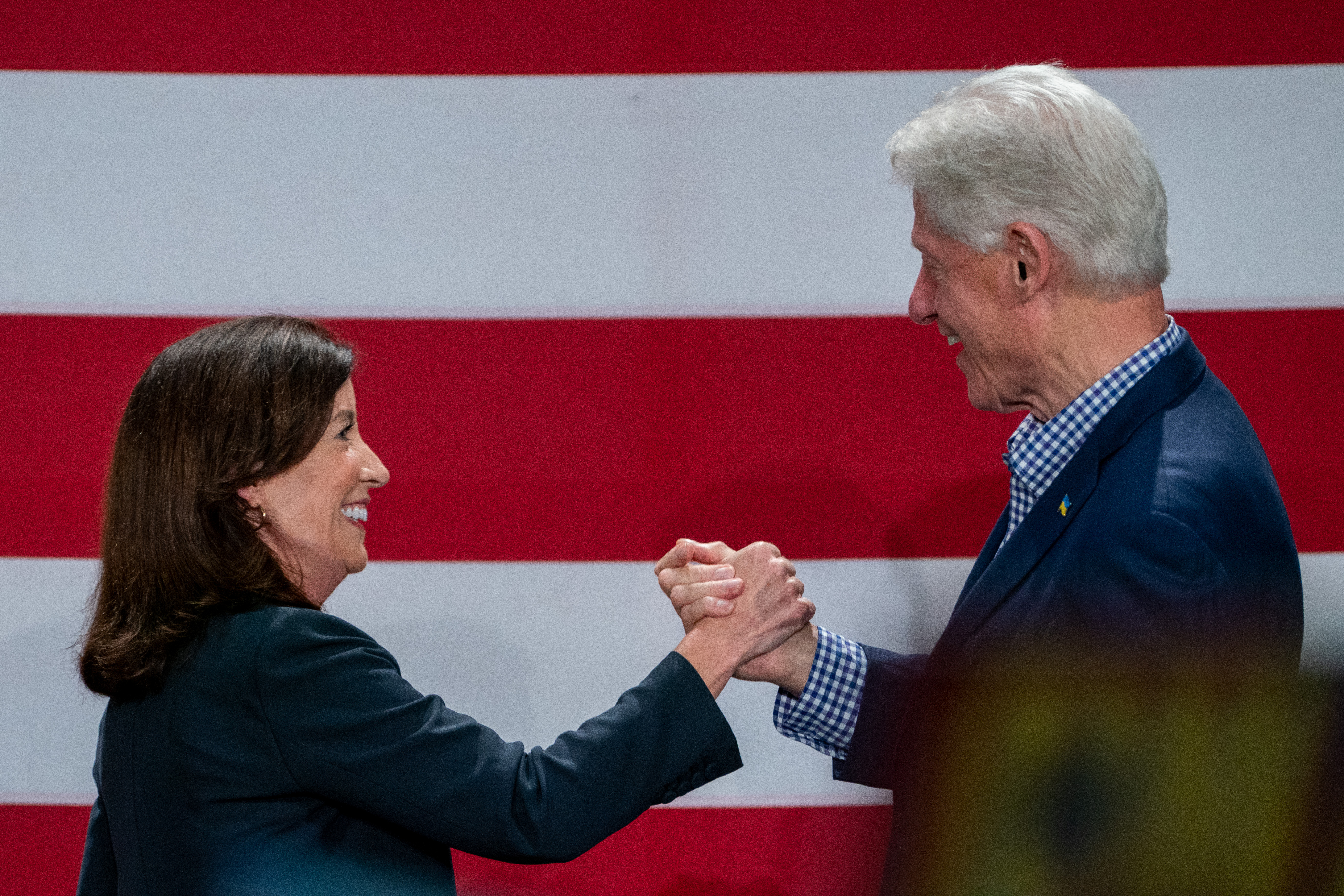 NEW YORK — Former President Bill Clinton appeared in Brooklyn on Saturday as part of a rotating cast of Democratic Party heavyweights scrambling to boost the campaign of New York Gov. Kathy Hochul, who is in an unexpectedly tight race with Republican challenger Rep. Lee Zeldin.

Clinton spoke to a few hundred people — many who were members of local unions — packed into an event space in Downtown Brooklyn two days after Hochul took the stage with Vice President Kamala Harris and former Secretary of State Hillary Clinton, and a day before President Joe Biden is set to touch down in Yonkers for yet another rally.

The tremendous resources being diverted to New York, typically a Democratic shoe-in, demonstrates just how competitive the race has gotten as polls consistently show Hochul with a single-digit lead that has dropped uncomfortably low for members of her camp.

“We’ve got a close election; there are close elections all around this country,” state Democratic Party Chair Jay Jacobs said. “In the House of Representatives, the Senate and, yes, right here in the state of New York.”

Clinton sought to address some of the attacks coming from across the aisle: Inflation, he said, is up across the world and is largely being driven up by supply chain issues. The destabilizing effects of the Covid-19 pandemic have led to a mental health crisis and an increase in lurid crimes that have grabbed headlines. High gas prices are being driven by geopolitical forces that will become irrelevant once American refineries are up and pumping again. And bail reform is being unfairly wielded as a campaign cudgel by Zeldin and others on the right.

“Lee Zeldin, he makes it sound like Kathy Hochul gets up every morning, goes to the nearest subway stop and hands out billy clubs [and] baseballs bats,” Clinton, the Chappaqua, Westchester County resident, said.

Clinton ticked off a number of Hochul’s accomplishments since she was sworn in as governor last summer following the resignation of former Gov. Andrew Cuomo, and he argued that Zeldin’s votes against major federal legislation, including the American Rescue Plan and the CHIPS and Science Act, showed that he does not have a plan to deal with these issues if elected.

But despite the closeness of the contest just days before polls close Nov. 8, Clinton said New Yorkers he spoke to before the event were unaware of the dynamics.

“I’m telling you all this because the whole election could come down to how big the turnout is in Brooklyn,” he said.

For his part, Zeldin held campaign rallies across the Hudson Valley on Saturday, concluding with an event with Tulsi Gabbard, the former Hawaii Democratic congresswoman who left the party last month and has been hitting the campaign trail for Republicans across the nation.

Zeldin said Friday that his campaign’s polling last week found the race to be neck-and-neck, and, “We’ve just felt growing momentum every day since. We’re going to win this race on Tuesday as long as we get our supporters out.”

New York has twice as many Democrats as Republicans, and no GOP candidate has won statewide in two decades. But Zeldin has hammered on the state’s crime issues and high cost of living, making him the party’s most competitive candidate for governor since George Pataki retired after three terms in office in 2006.

“We’re greatly concerned about safety on our streets, on our subways,” Zeldin said. “Republicans and Democrats and independents have decided that enough is enough. They are tired of the pro-criminal laws that have been passed up in Albany. You have weak district attorneys who are refusing to enforce the law, and they want to support our men and women in law enforcement.”

Much of the battle has been waged in New York City, where Zeldin is hoping to win more than 30 percent of the voteand then cruise in the suburbs and upstate. Hochul is pushing for a strong Democratic turnout in the heavily blue city as a way to drive turnout, win a full term and become the first woman elected governor in New York history.

Hochul, along with many of Saturday’s speakers, largely stuck to describing a foreboding future where the GOP and Zeldin are in charge, rather than detail what another term under her leadership would look like.

She cast the Republican Party as rife with extremists, election deniers, white supremacists and opponents of abortion rights and seemed to acknowledge recent polling that had shown the race to be far too close for many Democrats.

“I’m a street fighter. I love to fight. And do you know what I love the most?” she asked. “I love being underestimated.”

With the election only days away, most voters have already made up their minds about who to support, according to political consultant Basil Smikle Jr., which is why Saturday’s rally appeared to be more about goosing turnout.

“[Clinton] is still a very strong leader in the party and good on the stump. He sort of grounds [Hochul] in the party leadership of past and present,” Smikle Jr. said. “On top of that, he still is very popular with a number of older African American Democrats at a time when all Black voters — the base of the base — need to come out.”

Hochul’s campaign struggled to resonate with Black voters earlier in the cycle. And citywide elected officials who assumed office with the support of Black communities, such as Mayor Eric Adams or Public Advocate Jumaane Williams, have made scant appearances on the campaign trail.

Adams — who has lately toned down his criticism that Albany inaction on bail reform is contributing to crime — took to the stage to praise his relationship with the governor.

“It doesn’t matter if you’re from Buffalo, N.Y. or Buffalo Avenue in Brownsville,” he said of Hochul, who is from Buffalo. “You have an authentic governor that is committed to uplifting the people of this city and state.”