Bipartisan resentment is building among lawmakers who say they are being cut out of President Joe Biden’s trade agenda as he begins brokering deals around the globe.

The White House is pursuing a new and unconventional approach to global economic engagement that eschews traditional free trade agreements — and the congressional approval they require. Members of both parties complain they are being kept in the dark as a result, receiving last-minute briefings with few details about the administration’s boldest initiatives.

It’s a pattern, officials say, that threatens the sensitive division of powers over trade and has some lawmakers debating how to assert their authority. And should Republicans take control of Congress in the fall, as they are favored to do, the scrutiny is all but certain to intensify.

In the latest example, the National Security Council dispatched officials to brief congressional offices on a major economic proposal for Latin America just days before Biden unveiled it in Los Angeles on Wednesday at the Summit of the Americas. The meeting left attendees feeling miffed and voicing their grievances to the White House, an aide told POLITICO. 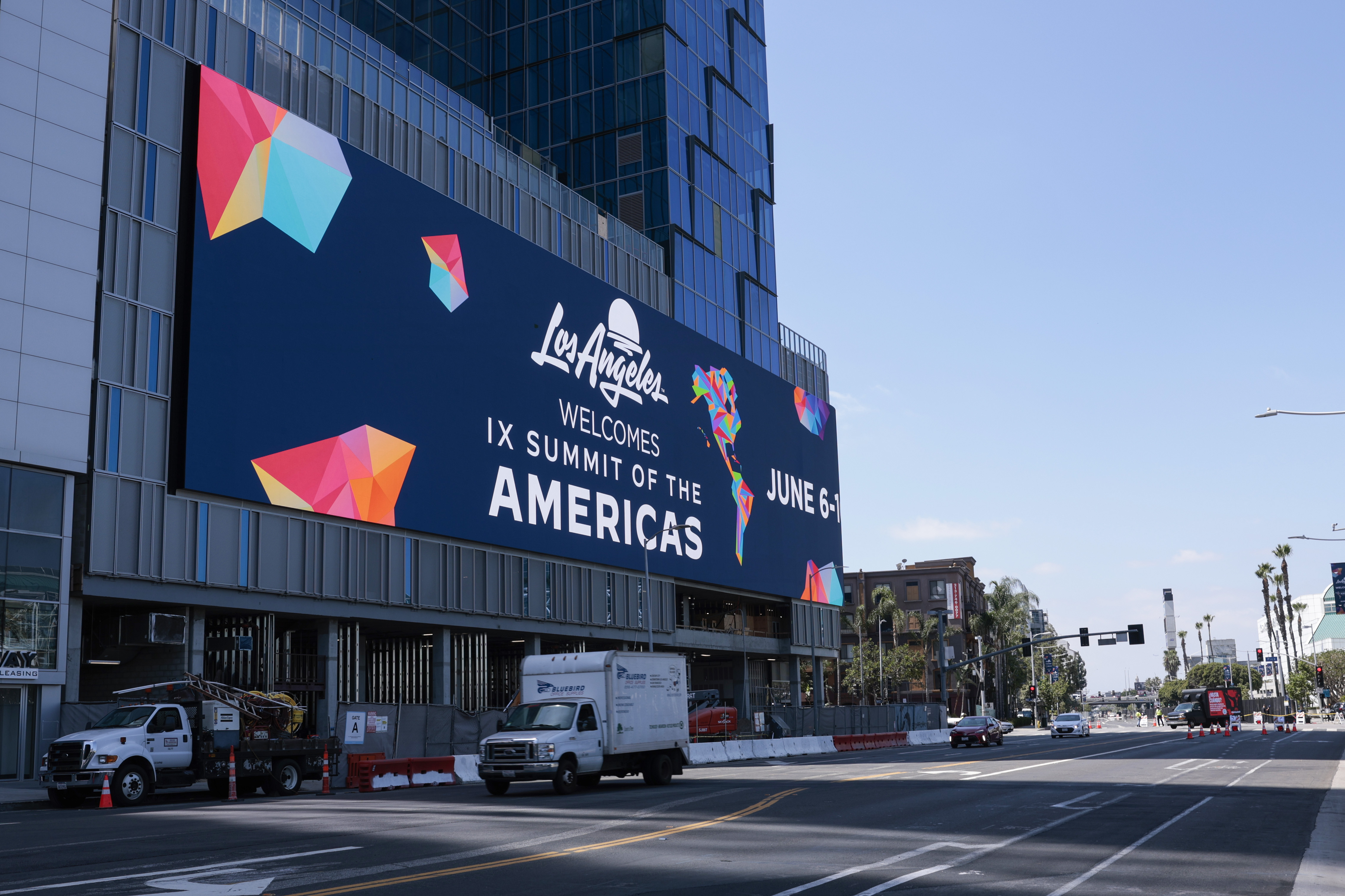 “It’s hard to give an impression of the plans when we are only hearing about them days before the summit,” another senior congressional aide said afterward. “We would like to see true consultations with Congress.”

Frustration on the Hill has been building for months as Biden has begun efforts to forge new economic relationships abroad after spending his first year largely focused on domestic concerns. He has announced plans to negotiate sweeping economic agreements in not only Latin America, but also Asia, two regions that are key to U.S. national security and economic interests.

Rep. Earl Blumenauer (D-Ore.), the chair of the House Ways and Means trade subcommittee, supports the administration’s recent engagement with trading partners, but said “the disregard for congressional consultation and authorization is deeply troubling.”

“I criticized the previous administration’s unwillingness to consult Congress and seek authorization. I fully expected the Biden administration to do a better job,” Blumenauer said. “Sadly, these are examples where that has not come to pass.”

A White House spokesperson described the administration’s engagement with Congress on trade as “consistent and robust,” noting that agency officials held more than 40 meetings and briefings with lawmakers and their staff members prior to the launch of Biden’s Indo-Pacific Economic Framework.

“The administration looks forward to similarly robust consultations with congressional leaders on the Americas Partnership – consultations that have already begun,” the spokesperson said.

Biden has shied away from traditional free trade agreements as U.S. public opinion toward such pacts has shifted more negatively in recent years. The domestic political backlash and the U.S.’s ultimate withdrawal from the Obama-era Trans-Pacific Partnership, an 11-nation trade agreement between Pacific rim countries, remains a cautionary tale within the administration.

His alternative strategy has been to propose non-binding economic agreements that the administration contends are designed to tackle present-day trade priorities like improving supply chains, clean energy, digital regulation and corporate accountability. But those deals have drawn criticism from free traders for not lowering tariffs or otherwise expanding market access.

The structure of those agreements is also exacerbating a tension that has emerged under previous administrations, over the authority to dictate international commerce. It’s a responsibility that the U.S. Constitution granted to Congress but that has been delegated to the president over time, particularly through trade promotion authority laws, the most recent of which expired last July.

U.S. Trade Representative Katherine Tai and Commerce Secretary Gina Raimondo, Biden’s top trade officials, have repeatedly said Congress will be consulted as their negotiations with foreign counterparts play out over the Indo-Pacific Economic Framework and Americas Partnership for Economic Prosperity.

But lawmakers in both chambers and both parties say those meetings have been thin on details or come after preliminary talks with foreign partners are already underway.

One Democratic aide said lawmakers perceive an “apathy” from the National Security Council — the chief architect of the proposed agreements in Asia and Latin America — toward Congress’ role in developing trade policy. Lawmakers are increasingly looking for ways to address the “disregard for the congressional process and assert their powers,” the aide said.

Rep. Adrian Smith (R-Neb.) introduced a privileged resolution on Thursday that would compel USTR to turn over documents connected to its negotiations at the World Trade Organization over waiving intellectual property rights for Covid-19 vaccines — another trade discussion that lawmakers, especially Republicans, say the administration has not been forthcoming about.

Smith is seeking documents detailing how the waiver would increase vaccine deliveries to foreign countries and how the administration will prevent China from obtaining valuable intellectual property.

Consulting Congress on both the WTO waiver and on trade negotiations “cannot and will not be a formality,” said Smith, who is vying for the House Ways and Means gavel next Congress. “USTR — and Commerce and NSC if they are dipping their toes into trade — need to be more collaborative with Congress moving forward across the board.”

USTR’s standard procedure is to brief Hill offices before trade developments are announced publicly, and the agency asserts that more than 75 such meetings have occurred during Tai’s tenure. Those include conversations on global trade pacts, WTO negotiations, and ongoing dialogues with allies like the U.K. and Taiwan.

“Robust and regular engagement with Congress has been a top priority for USTR and Ambassador Tai from Day One and Congress will continue to be a critical partner in shaping U.S. trade policy,” said the agency’s spokesperson, Adam Hodge.

Tai is also expected to host a bipartisan delegation of lawmakers in Geneva next week during the WTO’s 12th Ministerial Conference.

But the mounting frustration has prompted rare public rebukes of Tai, a former Capitol Hill attorney who remains popular among her former colleagues in Congress.

The top Democrat and Republican on the Senate Finance Committee joined a handful of colleagues last month in penning a letter to Tai that chastised her office for failing to adequately consult lawmakers on WTO negotiations and trade talks in Asia. A similar letter from a group of House Republicans followed two weeks later.

Tai still has defenders in both the House and Senate, where she was the only nominee in Biden’s Cabinet whose confirmation received unanimous support. Washington Rep. Suzan DelBene, a member of the House Ways and Means Committee and leader of the centrist New Democrats, praised her “knowledge and thoughtfulness on all things trade” and said Tai “understands the need for a close partnership between the administration and Congress.”

But communication and consultation are still lacking, others say, despite her close ties and well-regarded reputation on Capitol Hill.

“We have a good, strong working relationship with Ambassador Tai, but we often read about [initiatives] after they are announced. I’d like to see that improved,” said Kevin Brady (R-Texas), the ranking member on House Ways and Means.

Senate Finance Chair Ron Wyden (D-Ore.) said USTR’s engagement has improved in the weeks since he and colleagues pressed Tai for more briefings. But other arms of the administration that have taken a leading role in crafting trade policy have not done the same, he said.

“I’m concerned that offices outside the trade sphere do not fully appreciate Congress’s role in trade initiatives and have therefore failed to consult with Congress at the appropriate point,” Wyden said, adding that discussing trade initiatives “in a timely manner” is necessary to build support for Biden’s agenda.