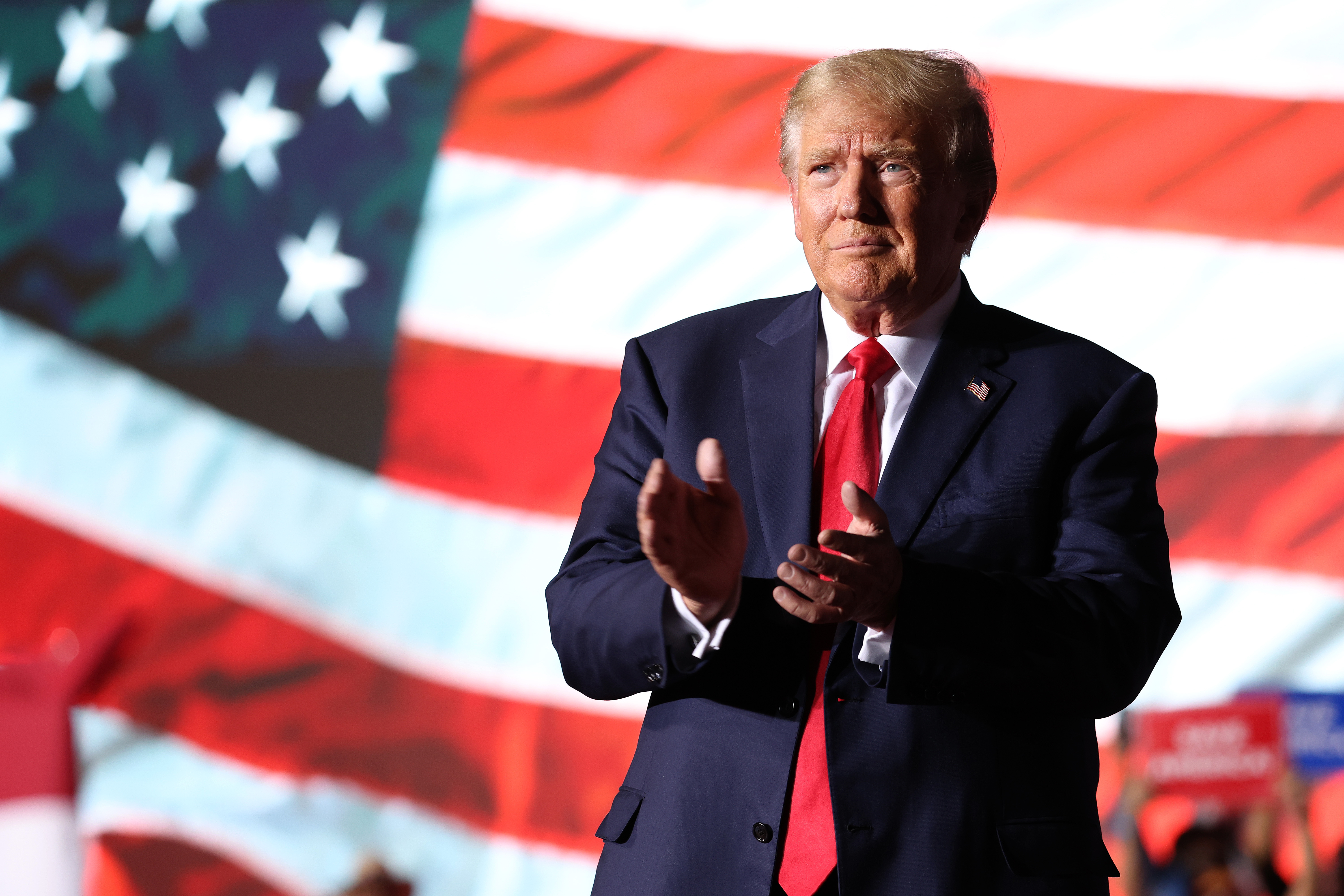 But as Trump prepares to plunge into another bid for the presidency, he starts as the GOP’s favorite.

A new POLITICO/Morning Consult poll shows that 47 percent of Republicans and Republican-leaning independents say they would back Trump if the Republican presidential primary were held today. By comparison, 33 percent said they would back Florida Gov. Ron DeSantis. No other prospective candidate received above 5 percent in the poll, save former Vice President Mike Pence, who stood exactly at that figure.

But if the poll shows the clear path forward for Trump as he readies his third White House run since 2016, it also exhibits the peril ahead. Among all voters surveyed, 65 percent said Trump should probably or definitely not run again (with 53 percent in the definite camp). And while Trump’s standing has not dropped significantly since pre-election (he stood at 48 percent in the most recent Morning Consult poll), DeSantis’ star has risen. The Florida governor was at 26 percent in that last poll.

The 45th president is scheduled to announce his second campaign for another term during a primetime event at his Mar-a-Lago club in Palm Beach, Fla. Trump’s planned announcement, for which aides and allies in recent days had advocated a delay, comes amid mounting questions over his role in the party and a veritable pile-on for the poor midterm results — with several hand-picked candidates losing to Democrats and his MAGA movement washing out in battleground contest after contest.

There’s itching among Republican officials and donors to finally move on from Trump, including from top conservative groups, like the Club for Growth, which put out a polling memo showing Trump trailing DeSantis in critical primary states. Separately, another survey commissioned by the Republican Party of Texas found Trump trailing DeSantis by 10 percentage points, 43 percent to 32 percent. Trump was a clear favorite among Texas Republicans in their October poll.

And Pence sat for interviews on the eve of his new book publishing in which he acknowledged being angered by Trump on Jan. 6, 2021, and called his actions that day “reckless.”

There’s the legal morass as well. Trump is embroiled in multiple high-stakes court battles over his handling of classified documents, prior business practices, his actions on Jan. 6 and possible interference in Georgia’s 2020 election recount. Announcing a presidential run could complicate some of those investigations, which are expected to ramp up in the coming months. An announcement also sets off campaign finance restrictions and would cut Trump off from funds used to pay for his representation in some of those cases.

But Trump has survived periods of uncertainty before, fortified by a veritable army of MAGA supporters. And privately, he’s been unmoved by the most recent critics, seeing the chorus as similar to the one he faced during his past White House runs and stint as president. He also has been itching for a rematch with President Joe Biden, calculating that he could defeat the man who beat him for the presidency if the two were to run without a worldwide pandemic shadowing over the race. The same POLITICO/Morning Consult poll showed that 66 percent of voters said Biden probably or definitely should not run for president in 2024 (with 45 percent in the definite camp).

Making another White House run amounts to an extraordinary, though long anticipated, move for Trump — one certain to reshape his party’s trajectory, raise complicated legal questions and alter the presidency for the man who defeated him, who celebrates his 80th birthday on Sunday.

After he lost his reelection bid to Biden in 2020, Trump launched a personal crusade to overturn the results, falsely claiming it was stolen over unsubstantiated claims of voter fraud and elevating a host of election-denying candidates in the midterm elections, some of whom went on to win office. Biden has warned that Trump and those allied politicians are a threat to democracy. He’s also said to aides that he is more likely to run for reelection should Trump run too.

It is widely expected that Trump will face Republican primary challengers, including some potentially from his own administration — Pence, DeSantis or former Secretary of State Mike Pompeo.

Trump has kept close tabs on polling about potential GOP candidates, and in an effort to flex his own political muscle, he has shared 2024 polling with his rally crowds and circulated results among the press. And he has already taken aim at DeSantis, who is widely viewed as a top challenger following his sweeping re-election last week in Florida.

While it initially appeared after Jan. 6, 2021, that Trump would be rejected by many of his GOP brethren, he has continued to maintain power over the party. House Republican Leader Kevin McCarthy visited Trump at his home in Mar-a-Lago shortly after the riots, signaling a continued embrace from the party.

And in the 2022 midterms, Trump took on the role of kingmaker, picking and choosing endorsements and exacting revenge on lawmakers who he believed had crossed him politically. Nearly all of those GOP lawmakers who voted for his impeachment over Jan. 6 have either left office or were defeated in primaries.

Underwhelming midterm results for the Republican party called into question Trump’s standing, especially after he elevated candidates who underperformed or even lost in the general election. Trump was warned by top party officials against announcing a run before the Dec. 6 runoff Senate election in Georgia for fear it would distract from Republican campaigning in the state and spark a fundraising boon for Democrats. But Trump has been anxious to make his mark before the next Congress.

Before even announcing, his candidacy was endorsed by one of the top Republicans in the House, Rep. Elise Stefanik of New York, who said she supported him because he would easily defeat any GOP challenger and she believed America was more prosperous and safe under the Trump administration.

“I am proud to endorse Donald Trump for president in 2024,” Stefanik said. “It is time for Republicans to unite around the most popular Republican in America who has a proven track record of conservative governance.”