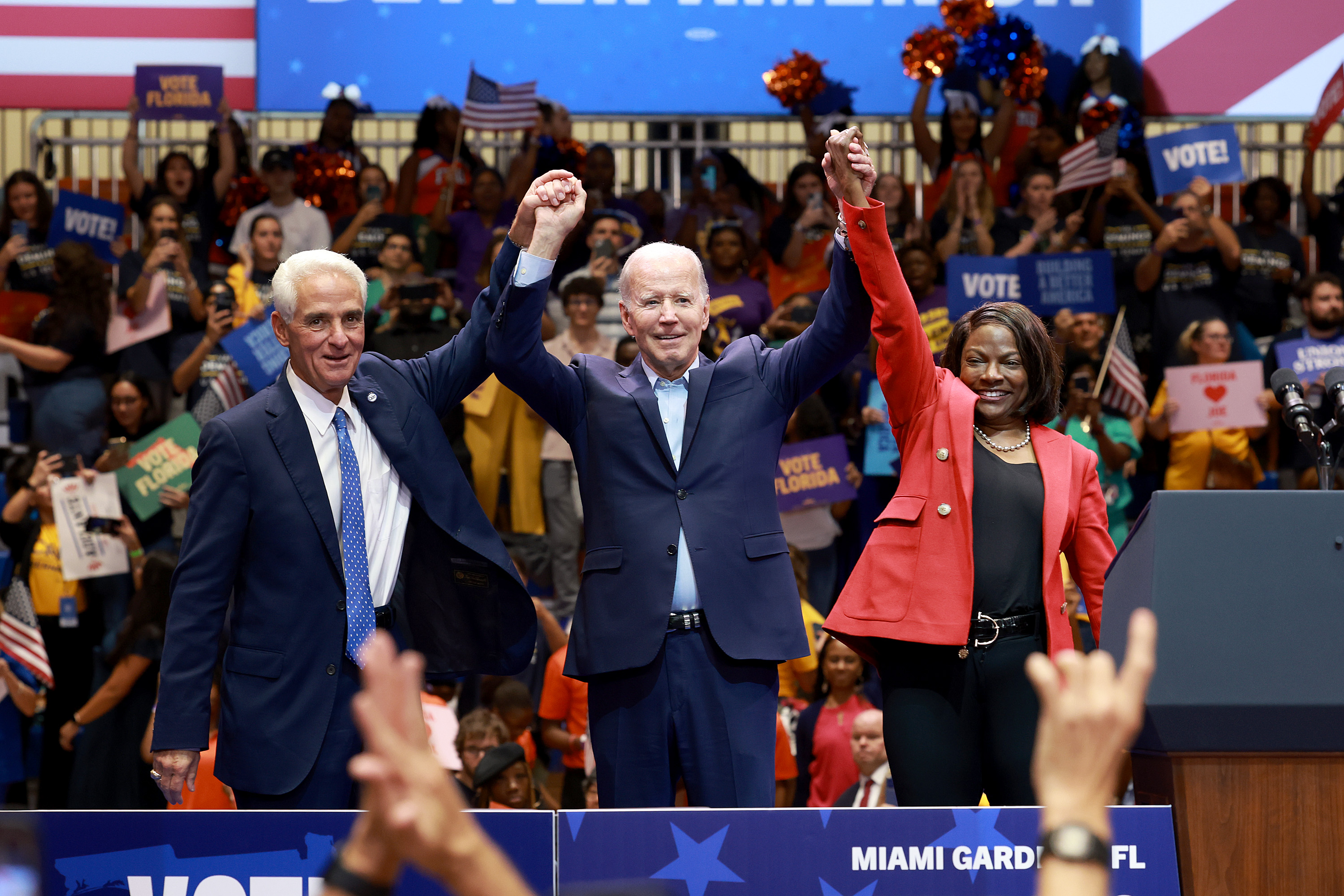 For some reason, the White House is telling itself that the president’s trip to the Sunshine State this week sets up his midterm message perfectly, or as a CNN report put it, serves “as the ideal backdrop for his warnings against ‘mega-MAGA’ Republicans.”

“For months,” according to CNN, “Biden and his team have been hoping to use Florida’s constellation of Trump-aligned Republicans — including the former president himself — to crystallize Biden’s closing pitch that the election is a choice and not a referendum and galvanize Democratic voters.”

A senior Biden adviser explained of Tuesday’s venture into Florida, “You can’t shake a stick without hitting a Republican that represents the MAGA extremes that the president is talking about. So, it allows the president to really drive home what’s at stake and what the choice is.”

This raises some questions: If a large, politically prized state that is one of the most important in the Union has alleged extremists everywhere, are they really that extreme? And if Democrats do poorly in Florida next week, as seems likely, what does it say about the party?

Every party that is heading for a midterm drubbing has a moment of desperation-driven wishful thinking near the end of a campaign, and clearly, this is one of those moments.

Anyone who thinks that it’s a good idea to campaign against a future-oriented, ethnically diverse state where the Democratic Party is cratering has been spending too much time reading White House press releases, or Ron Klain’s Twitter account.

Besides Donald Trump, who is sui generis and not an elected official in the state, the chief Florida bogeyman is Ron DeSantis. For the left, he earned much of his notoriety during the pandemic, when he was a fierce opponent of lockdowns, school closures and mandates. His critics will never admit that he was correct, but at the very least, it’s hard to rekindle the righteous fury that was directed at him during the height of the pandemic.

Indeed, his response is one of his calling cards in a re-election campaign that looks set to sweep aside his adversaries.

It’s worth pausing over this fact. Florida is not Utah or Alabama. It has been a swing state for much of the last 100 years. One of the most reliable indicators that a candidate is going to become president of the United States is if he wins the Sunshine State. George W. Bush did it twice, and so did Barack Obama. And not by large margins. Trump also won it twice, by 1 point in 2016 and in a harbinger of the state’s move rightward, 3 points in 2020.

At the state level, it’s been the same picture. DeSantis won the governorship by 0.4 points in 2018. Rick Scott won re-election as governor in 2014 by 1 point, and in relative terms, won in a landslide in his first race, beating his Democratic opponent by 1.2 points in 2010. Neither DeSantis nor Scott got above 50 percent in these elections.

DeSantis has cultivated a reputation as a Trump-style culture warrior, so it’s easy to miss his practical side. He’s championed environmental protection in Florida and has been a competent steward of his state, as his response to Hurricane Ian underlined. A Florida Atlantic University poll found that 63 percent approved of his handling of the hurricane, including 41 percent of Democrats.

It’s not a close call who’s the more marginal figure in Florida, Biden or DeSantis. According to a Data for Progress poll, Biden is underwater 42-58, with 52 percent having a very unfavorable view. DeSantis has majority support, at 55-43, with 48 percent very favorable.

Biden uses another Florida pol, now-Sen. Rick Scott, as the occasion for making a tried-and-true attack against the GOP, namely that it wants to cut entitlements. This is an issue where it is actually the case, as Biden likes to say, that it’s no longer your father’s Republican Party. Trump turned the GOP against austerity economics and party leaders have largely resisted returning to entitlement reform as a major cause. When he came up with his own agenda earlier this year, Scott suggested voting to reauthorize entitlements every five years rather than having them run on autopilot. Senate Minority Leader Mitch McConnell gave it the cold shoulder, and the chances of the proposal being taken up by Republicans should they win congressional majorities are exactly zero. At this point, there’s no way that Biden is going to make significant headway with it in the midterms.

The overall political message of Florida isn’t that Republicans are lurching into mega-MAGA irrelevance, but that Democrats are losing ground in a vital part of the country.

As The Economist wrote recently, “Florida has become emblematic of much of America and central to all of it. The state is on the rise.” Its economy has doubled since 2002, and were it a sovereign country, it would have the 15th largest economy in the world. “Between 2010 and 2020,” the magazine notes, “its population grew at double the national rate. Florida has overtaken New York to become America’s third-most-populous state after California and Texas, with a dynamic and diverse demography, including fast-rising numbers of Hispanics.”

This should make the Democratic fade in the state all the more concerning to the party. Since 2020, there are roughly 330,000 fewer registered Democrats in Florida. Republicans have now ticked ahead of Democrats in registrations for the first time, taking a 5.3 million to 5 million lead. Contrast that with 2008, when, benefiting from an Obama-era influx, registered Democrats outnumbered Republicans by 700,000.

As a CNN report noted, Republicans have picked up nearly 60,000 new registrations among Hispanics, while Democrats have lost 46,000 — another indication of Democratic erosion with this key demographic. Such is the slide that Republicans could conceivably win in heavily Hispanic Miami-Dade county, the most populous county in the state that has traditionally been a pillar of the Democratic presidential coalition in Florida.

If Democrats want to chalk this all up to extremism, they are deluding themselves. Florida is a GOP success story and a cautionary tale for Democrats, rather than the key to staving off midterm defeats.