The former vice president would attend the conference each year to address an audience of like-minded evangelicals who were eager to hear him speak and elevate him politically.

This year, Pence has taken on a new persona among the crowd—a Trump era castoff who is probably better off not showing his face. And he seems to know it. The former veep was invited to the conference but decided not to attend. It was the first time Pence had missed the conference in five years.

“I was such a big fan of his but that part of the Republican Party is the educational elites – the old horses are on their way out,” said Mary Obersteadt, the immediate past president of Nashville Republican Women. She wore rhinestone Trump and DeSantis pins on her conference lanyard. “I respect him for what he did and how he served this nation but he’s so disappointing when he – he should have communicated and stayed with Trump with Jan. 6, they should have been on the same level.”

Pence’s absence from this year’s conference was due to a scheduling conflict, according to the conference organizers and Pence’s team. On Thursday, he attended a roundtable with Ohio Gov. Mike DeWine.

But while he still is rooted in the Christian conservative community, having attended an event with the Coalition in North Carolina to engage Chrisitan voters in the Charlotte area, his decision to skip the Faith & Freedom gathering underscores the crossroads he currently finds himself in politically.

“I think he’s seeking God’s direction for his decision on what to do next,” said Dr. Robert Jeffress, pastor at First Baptist Dallas, who is close to both Pence and Trump, and sits on the advisory board for Pence’s political group, Advancing American Freedom.

At a time when Pence’s main ideological causes are on the cusp of historic success—with the Supreme Court set to overturn the landmark abortion rights case, Roe v. Wade — he finds himself in the thick of intra-party drama. This week, the House select committee investigating the riots on Capitol Hill zeroed in on Pence’s decision to resist Donald Trump’s pressure for him to block certification of the Electoral College vote count. 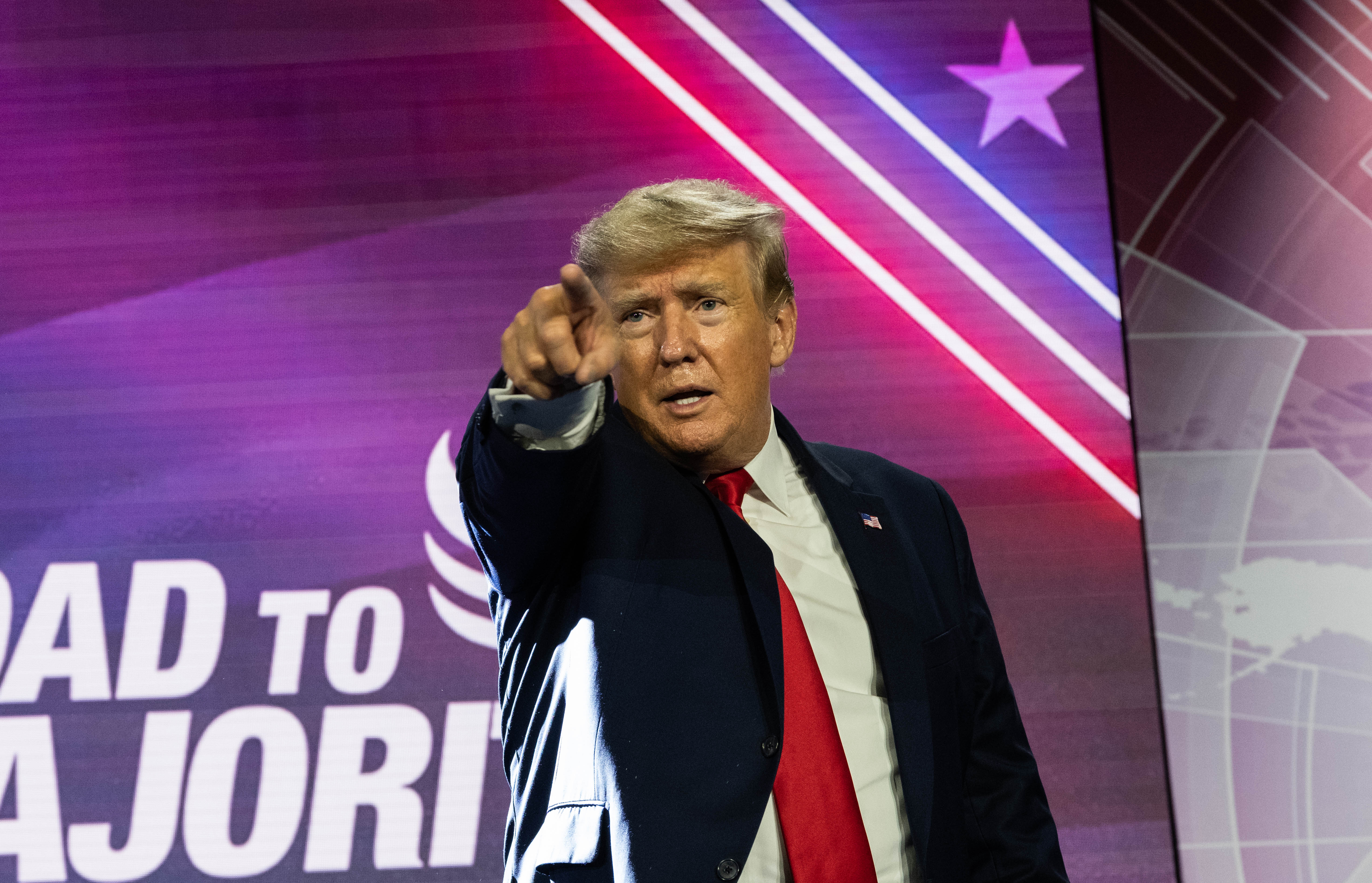 While Pence has, so far, dodged discussing the committee’s proceedings, Trump used his own appearance at the Faith & Freedom conference to attack his veep.

It was a remarkable moment for a conference that in past years served as a celebration for the former vice president as a top conservative Christian leader. But things have changed since Trump left office. Last year, in the shadow of Jan. 6, Pence was jeered by the crowd and called a “traitor” while on stage. Now, when asked about what they think of Pence or how they view his political future, attendees sighed or visibly shrugged.

“That’s a good question,” said Sandi McGuire, a Christian minister from Raleigh, North Carolina. “I haven’t seen him much. I don’t like speaking adverse toward anyone, he did great work. He came here last year and a percentage booed him. I’m not sure in fairness where he is. I wish him the best but he hasn’t been anywhere to be found.”

“It’s kind of hard, it’s a hard one,” said Emily Hinojos from Rutherford, N.C. when asked about Pence’s political future. “I don’t know where he’s at since Jan 6. It’s hard to tell you’re not in their shoes but we would have liked him to support Trump better.”

The mood of the crowd at Faith & Freedom reflected the degree to which Republican politicians are judged not so much by their ideologies but by their relationship to Trump. Ralph Reed, a Republican strategist and founder of the Faith & Freedom Coalition, is close with both Trump and Pence. But when asked if he was surprised by Trump’s attacks, he would only say he consulted with Trump’s speechwriters yesterday.

“If Mike Pence wanted to come and wanted to offer a rejoinder to these folks, he could have done it. I’m not saying he should have done it. I told him when I saw him a couple weeks ago, no harm no foul, but I said I want you here next year and he’ll be there,’” Reed said to a small group of reporters after Trump’s speech. 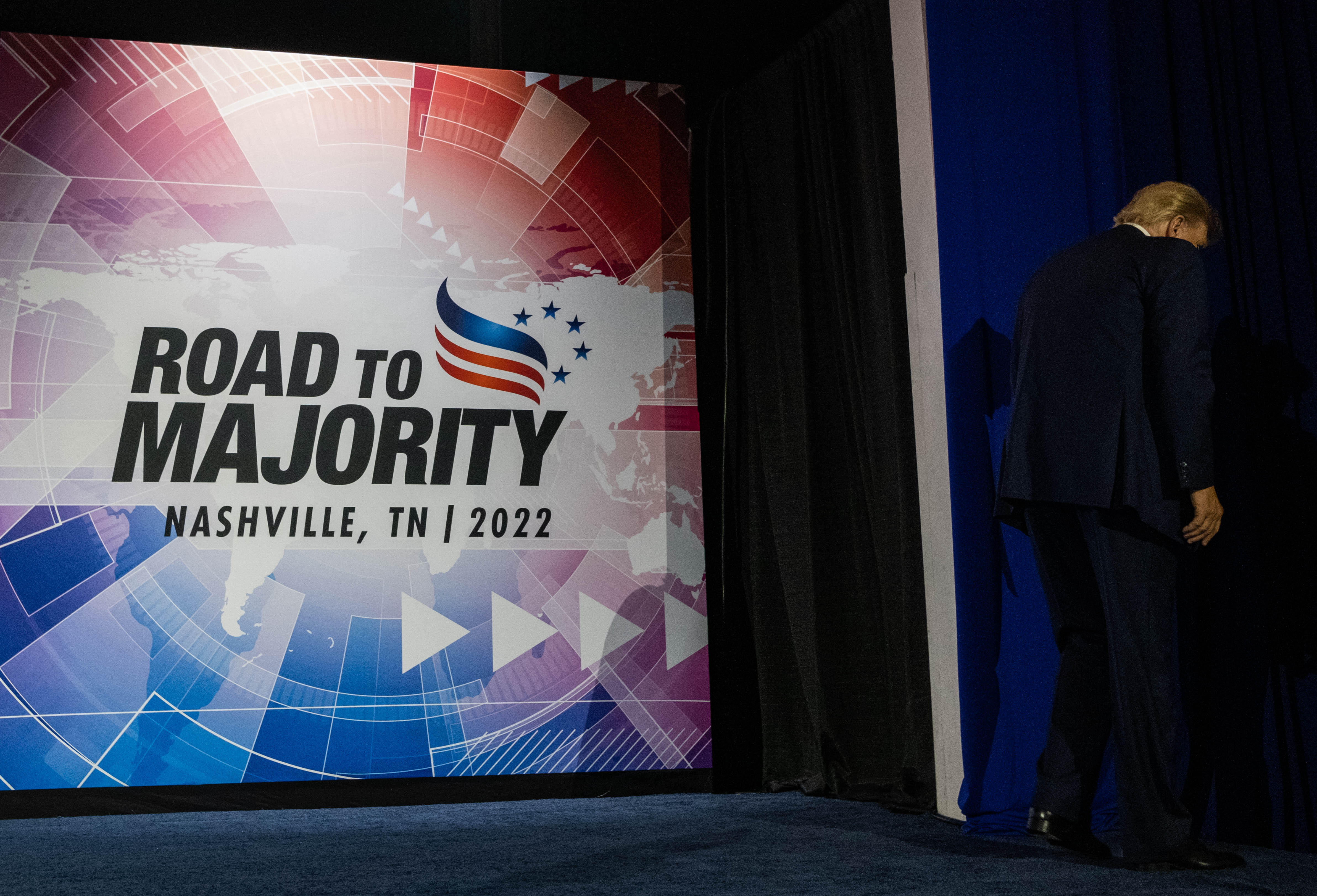 Pence’s own relationship with Trump is deeply complicated. For a few months after leaving the White House, the two would occasionally speak. But they haven’t talked for a year now even though their paths have occasionally crossed, including when both men addressed top Republican donors at a retreat in New Orleans in March. Trump continues to admonish his former vice president in public, while Pence has remained firm in his decision to certify the election.

In recent months, Pence has turned his focus to the midterms. He’s offered endorsements in key midterm races like Georgia Gov. Brian Kemp and held a fundraiser for incumbent Rep. Steve Chabot on Thursday. On Monday, he is set to deliver a speech on the economy at the University Club of Chicago.

“Our path is a little bit different than everybody else is at this point,” said a person close to Pence’s political operation, who defended Pence’s decision to not go to the Nashville cattle call. “And whether he decided to do this thing or not, he doesn’t have to go there to get coverage.”

But it’s unclear how Pence can build up a national profile if he were to lose the full support of his bedrock constituency: Evangelicals. Not everyone in his camp is worried. Aides to Pence say he holds appeal across the Republican party.

“Vice President Pence checks the hawk lane. He checks the traditional GOP lane. And obviously probably the biggest one is the Evangelical lane,” said the Pence ally.

And Bob Vander Plaats, president and CEO of The Family Leader, a conservative Christian parent organization for the Iowa Family Policy Center, said Pence’s support remains strong among social conservatives and Evangelicals in Iowa, especially as support of Trump wanes.

“Not to play Bob Seger on you, but I think they’re looking to turn the page,” Vander Plaats said of Iowa voters he talks to. “Take the best of Trump, and let’s see if Ron DeSantis can carry on that fight—or Mike Pence or Mike Pompeo or Ted Cruz or whoever you throw into that match.”

But among those in Nashville this weekend, Pence seemed more a relic of the past than an element of the future. None of the merchandise stalls that lined the entrance to the conference ballroom featured Pence’s name, while there were piles of red, white, and blue “Trump” and “Trump 2024” t-shirts and hats for sale.

“I feel like he was mistreated so long he wanted to give his soul a break and his family. I don’t think it’s political, it’s personal – he doesn’t want to get attacked right now,” said Krista Kiepke from Clarksville, Tenn. “Jesus himself removed from the disciples to refresh so he could do his job so I look at it as that.”