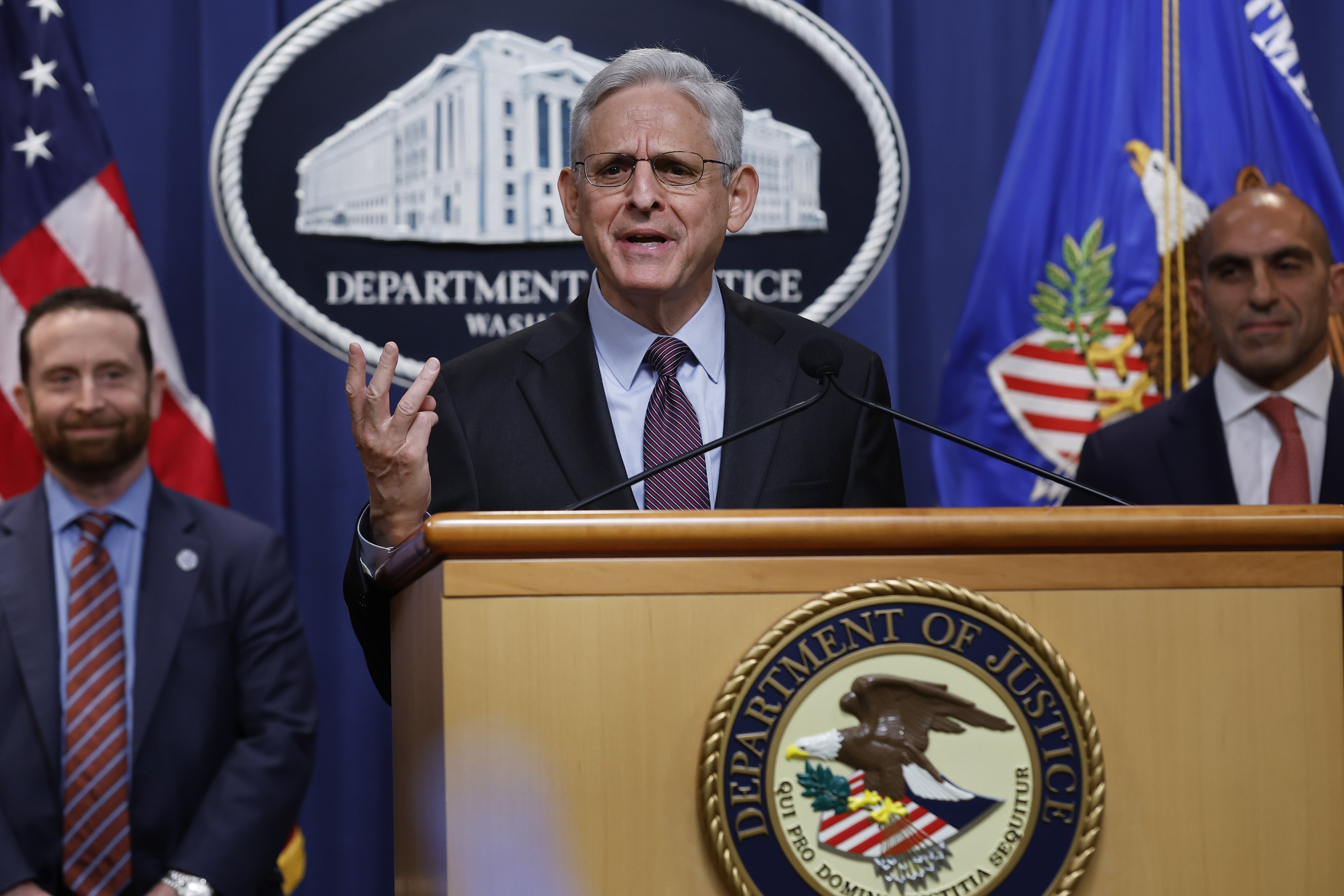 The acquittal of the defendant in the highest-profile case brought by special counsel John Durham intensified calls for him to wrap up his investigation into the origins of the FBI’s probe into Donald Trump’s Russia ties, but there are few signs that the Justice Department is pressuring Durham to pull the plug.

Durham’s semi-annual budget report released Friday showed that his office spent almost $2 million in the six-month period ending in March, down from about $2.36 million in the prior half year, including money federal agencies spent on Durham’s behalf.

Those amounts include some of the costs related to the false-statement case Durham brought against Democratic attorney Michael Sussmann, but don’t capture the cost of the two-week-plus trial last month that ended with a jury quickly acquitting the former federal prosecutor, who worked for both the Democratic National Committee and the Hillary Clinton campaign in 2016.

“I certainly think it’s time for [Attorney General Merrick] Garland to circumscribe the Durham boondoggle both temporally and topically,” Larry Tribe, a liberal legal scholar and Harvard professor, told POLITICO. “The Durham roadshow has expended far too much of the taxpayers’ money with precious little to show for it and needs to be wound down in an orderly fashion. Enough already!”

Conservative lawyer and prominent Trump critic George Conway also called for Durham to wrap it up.

“I hope it’s headed into the trash can because it should be. The Justice Department should put an end to this,” Conway said on MSNBC following the verdict, urging Garland to tell Durham the investigation needs to end.

“As attorney general he [Garland] has under the regulations, he has the power to say that’s enough,” Conway added. “In fact, he has the obligation to do it if he thinks that Durham is on a frolicking detour, which I think he is. I think the reason it hasn’t been done already was for the simple reason they didn’t want the political blowback of people saying: cover up, cover up.”

Even some supporters of Durham’s probe said Sussmann’s fast acquittal indicated that the long-time prosecutor misjudged the case.

“Everything just kind of fell apart,” former federal prosecutor Andrew McCarthy said in a podcast recorded near the end of the trial. “The further we get into the trial, the more I can’t understand why Durham brought this case. … I’m just really surprised especially with everything riding on his investigation and his final report that he would take a chance like this with a case like this. … I just wonder if it was worth it.”

A National Review editorial called the prosecution “unwisely brought” and expressed concern that the courtroom defeat would distract from Durham’s broader findings about actions Democrats took to publicize the Trump-Russia allegations and about the FBI’s handling of those claims.

For one thing, Durham has another, more-complex false statement case pending in Alexandria, Va. federal court against Russian-born foreign policy researcher Igor Danchenko. He’s accused of repeatedly and intentionally feeding inaccurate information to the FBI about his role in a dossier about Trump a former British intelligence officer, Christopher Steele, prepared for a research firm working for the Clinton campaign.

Danchenko, who has pleaded not guilty, isn’t scheduled to go to trial until October. Much of the evidence in his case is classified, necessitating protracted court hearings unless the case is dropped or Danchenko decides to cut a deal with prosecutors.

In theory, the case could be handed over to other prosecutors from Justice Department headquarters or the U.S. Attorney’s Office in Alexandria.

However, the idea of Garland simply booting Durham seems far-fetched. Even after the Sussmann case was filed, Garland publicly pledged to let Durham lay out his findings. “With respect to the report, I would like as much as possible to be made public,” Garland said during a Senate Judiciary Committee hearing in October. “I have to be concerned about Privacy Act concerns and classification, but other than that, the commitment is to provide a public report, yes.”

During the lead-up to Sussmann’s trial, his attorneys and others complained that the indictment in his case contained extraneous information that would never be admitted at trial and appeared to be an effort to air claims that the Clinton campaign and various technology experts concocted the idea of computer links between Trump and Russia.

U.S. District Court Judge Christopher Cooper declined to sanitize the indictment, but he never showed it to the jury. Cooper, an appointee of President Barack Obama, ruled that the accuracy of the claims shouldn’t be debated at the trial, although the jury heard that the FBI was unable to establish any link and concluded that the so-called secret server communications were relatively innocuous “spam.”

The 39-page, five-count Danchenko indictment also includes colorful assertions that seem unlikely to ever go before a jury: like speculation among Danchenko associates about whether he might be a Russian spy. Such detail is uncommon in federal criminal indictments. Some of the cases filed by special counsel Robert Mueller, especially ones against alleged Russian agents unlikely to ever stand trial in the U.S., appeared to be efforts to lay out a public narrative about Russian interference in the 2016 U.S. presidential race.

Asked at a news conference last December about whether Durham was subject to the same oversight as other Justice Department prosecutors, Garland didn’t answer directly.

“The regulations regarding the special counsel are pretty clear about what Mr. Durham does,” Garland said in response to a question from POLITICO. “I don’t want to say anything more beyond what’s in the regulations, but we are following the regulations.”

Officials have also declined to detail who at Justice Department headquarters is overseeing Durham, but a senior career official in Deputy Attorney General Lisa Monaco’s office has served as a point person on aspects of the Durham probe, a person familiar with the situation said. Whether Monaco herself has played a role in overseeing Durham is unclear.

The regulations, adopted in 1999 by Attorney General Janet Reno after the expiration of a widely-criticized independent counsel statute, seek to give a special counsel independence from the department while retaining ultimate control for the attorney general.

The rules say Durham and any other special prosecutor “shall not be subject to the day-to-day supervision” of anyone at the Justice Department. However, the attorney general reserves the right to veto “any investigative or prosecutorial step” if it “is so inappropriate or unwarranted under established Departmental practices that it should not be pursued.”

Garland could change or revoke the special counsel regulations, but such a move would likely trigger a political firestorm and seems unlikely, especially with midterm elections just months away.

What could trigger a showdown between Garland and Bill Barr is if Durham wants to bring a criminal case against someone new. At least two potential witnesses at Sussmann’s trial declined to testify, saying they feared prosecution by Durham’s team. It’s not clear whether Durham is actively considering charging those people, especially since the events of the 2016 campaign are now more than five years old.

Under the special counsel rules, sometime between July and September, Garland is supposed to make a decision about whether Durham’s probe should continue into another fiscal year. His work began in May 2019 at the request of Attorney General Bill Barr, who has said he was deeply suspicious about how the FBI’s probe of Trump got underway. In October 2020, Barr

quietly converted Durham into a special counsel, complicating any efforts to dismiss him or constrain his work. The change in status was announced after Trump lost the election.

Even as other some other conservatives dumped on Durham this week, Barr praised his endeavor and said the storytelling part of the probe is as significant as the outcome of any prosecutions

“People have done, I think, a very good job trying to develop this case in the face of very strong headwinds. And part of this operation is to try to get the real story out,” Barr said on Fox News.

“And I think that Danchenko prosecution is going to further amplify these themes and the role that the FBI leadership played in this, which is increasingly looking fishy and inexplicable.”

“If you want the facts and want a report, that can be done fairly quickly,” the former attorney general told Fox’s Jesse Watters. “If you want scalps, that takes time.”