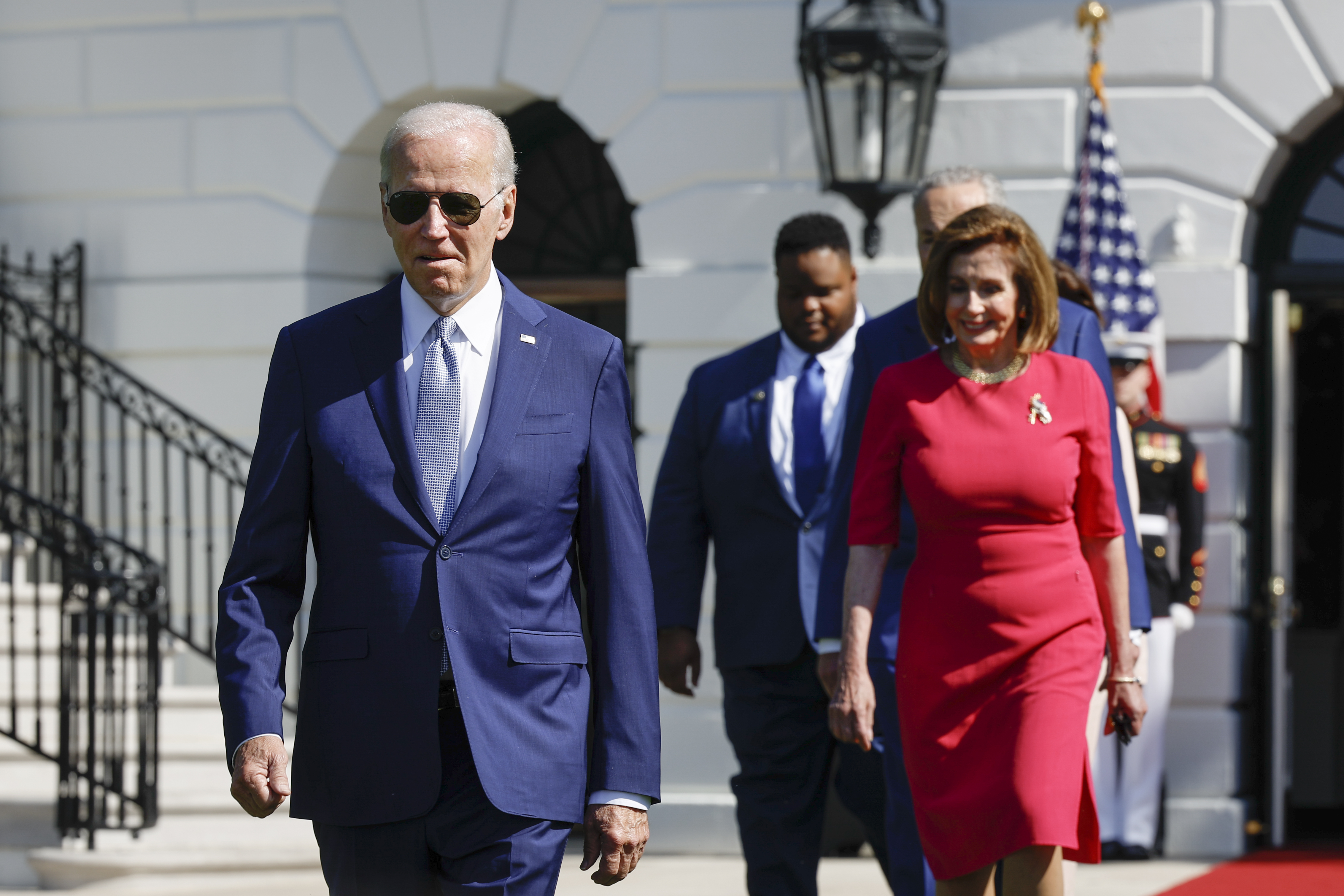 Of all the Democrats delighted by the party’s surprisingly strong midterm showing, few were more overjoyed than President Joe Biden and Speaker Nancy Pelosi, who in the twilight of their careers have become the faces of their party.

And as it became clear on Wednesday that Republicans would have, at best, a narrow majority, Biden told Pelosi he’d like her to remain in office, to serve with him in what could be the final two years of their decades in public life.

“I hope you stick,” Biden told Pelosi in a phone call after congratulating her on the caucus’s unexpected victories and asking about her convalescing husband, according to Democrats familiar with the conversation. Pelosi interjected to note her personal considerations and Biden continued, “I know it’s family first but I hope you stick,” before Pelosi deflected again.

Biden wasn’t on the ballot and Pelosi faced little challenge in her San Francisco district, but you wouldn’t have known it from their reactions to the results. The soon-to-be 80-year-old president and the 82-year-old speaker, mutual admirers with similar roots and shared grievances toward critics and wise-guy pundits, were bullish about their prospects and felt vindicated by the party’s success.

With low approval ratings, endangered incumbents rejecting his presence on the campaign trail and much of the party grumbling about his last-minute decision to deliver a closing speech on democracy, Biden felt the election demonstrated, again, his tactile feel for the American voter.

He dialed a few dozen Democrats on Tuesday night and was, an aide recalled, thrilled when many of them mentioned how they had run on elements of his legislative agenda.

No conversation may have been sweeter than the one he made early in the evening to one of the House’s bellwether candidates, whose race hadn’t yet been called. Still, Biden knew Rep. Abigail Spanberger of Virginia would prevail and wanted to be among the first to congratulate her. He needed no reminding that it was Spanberger who, in the aftermath of the party’s defeat in last year’s Virginia governor’s race, said Biden wasn’t elected “to be FDR.” but to “be normal and stop the chaos.”

To voters, it was Republicans who appeared abnormal and perpetuating the chaos.

No Democrat grasped that more personally, and painfully, than Pelosi. Already devastated by the home invasion and vicious attack on her husband, Paul, the speaker was horrified at the callous response by some Republicans, who either belittled the assault or trafficked in conspiracy theories about its nature. She was, a confidante said, deeply wounded and did little to mask her feelings.

Pelosi put on an upbeat face at her traditional Election Day lunch with labor leaders and other allies at a Washington steakhouse. But friends there could tell she was concerned about the forthcoming results and had absorbed all the predictions from those dreaded pundits, to say nothing of her own lieutenants, that Democrats were likely to suffer a 20-plus seat defeat in the House.

Late that night, one of her longtime Democratic allies got on the phone with a very different Pelosi. She was “nearly giddy,” this Democrat told me, and was going through the election district by district to explain how the party was curtailing its losses.

Pelosi had been planning to step down in the face of a Republican wave and advisers were set to prepare a choreographed departure, including valedictory remarks. Those arrangements, though, have been put on hold and now she wants to see what the final House results are before deciding whether to relinquish her leadership post. One possibility, particularly if Republicans only have one or two seat advantage, is for her to remain in her position, at least for the initial months of the next Congress when floor maneuverings could be at their most significant.

In addition to Biden’s private urgings, Pelosi also has the support of her Senate counterpart: On Monday, Senate Majority Leader Chuck Schumer told POLITICO’s Burgess Everett and Marianne LeVine he hopes Pelosi remains as leader, adding: “I love her.”

Pelosi’s friends describe her as genuinely undecided and waiting on clarity from her adopted state on two fronts, as the pivotal House results from California trickle in and her husband begins what could be a long recovery in their San Francisco home.

Her decision has been transformed not just by the uncertainty of the outcome but by the attack on Paul Pelosi, which effectively merged what had been separate personal and political deliberations. She’s now weighing his health and needs going forward yet also is more gripped than ever by the risks to the country, given the political motivation behind the tragedy.

On a call with a cabinet official and a handful of lawmakers after the break-in, Rep. Anna Eshoo of California, the speaker’s closest friend in Congress, became emotional explaining how serious Paul Pelosi’s condition was, asking those on the call to say a prayer.

Other House colleagues are, this being Congress, more privately attuned to Pelosi’s plotting, and some were skeptical when she told CNN’s Dana Bash on Sunday that there was a de facto draft forming. “My members are asking me to consider doing that,” Pelosi said about remaining as leader.

Yet it’s a sign of respect for speaker, who has led House Democrats for nearly 20 years, that a full week after the election nobody in her cacophonous caucus has gone public nudging her to the exits.

Even some of her least-shy critics are only willing to say on background that, by leaving, Pelosi would simply be abiding by her own 2018 pledge to leave at the end of this Congress. “She said she was done, I assume she’ll honor that commitment,” said one Pelosi critic.

Many House Democrats believe she’ll indeed fulfill that pledge should the party fall short of the majority, which appears increasingly likely. For the moment, though, she’s spurred a frenzied Washington guessing game; her future status was a constant topic of conversation among lawmakers over the weekend orientation sessions for new members.

Pelosi has also frozen the planning of both her fellow octogenarians in the leadership, Steny Hoyer and James. E Clyburn, as well as the next generation of Democrats hoping to rise, most notably Rep. Hakeem Jeffries (D-NY), who has amassed significant support to succeed Pelosi as House Democratic leader.

Biden would be just fine delaying that succession.

An Irish-American from Delaware and an Italian-American from Baltimore, the two pre-Baby Boom Roman Catholics bonded when Biden was vice president. “My Catholic sister!” he’d exclaim when he saw Pelosi.

They’re both institutionalists at their core and have come to share a grave concern about the country’s democracy, a sense of alarm that has only grown after the attack on Paul Pelosi.

They have had some difficult patches during Biden’s presidency, mostly owing to Pelosi’s frustrations with the White House. She did little to hide her displeasure with the president during the stalemate over the infrastructure and “Build Back Better” legislation, and has even publicly complained about some of Biden’s rhetoric. More recently, she and her allies were irritated that he offered a conditional congratulations to House GOP Leader Kevin McCarthy for seeming to claim the majority.

Yet Biden has rarely grumbled about Pelosi, viewing her with something just shy of awe as she has delivered him win after win with a tissue-thin majority. And now he’s hoping she’ll stay, at a moment Democrats will control the Senate and will at least be positioned to make life difficult for a narrow House Republican majority.

One top Biden adviser put it simply: “He believes she’s the best Speaker ever.”