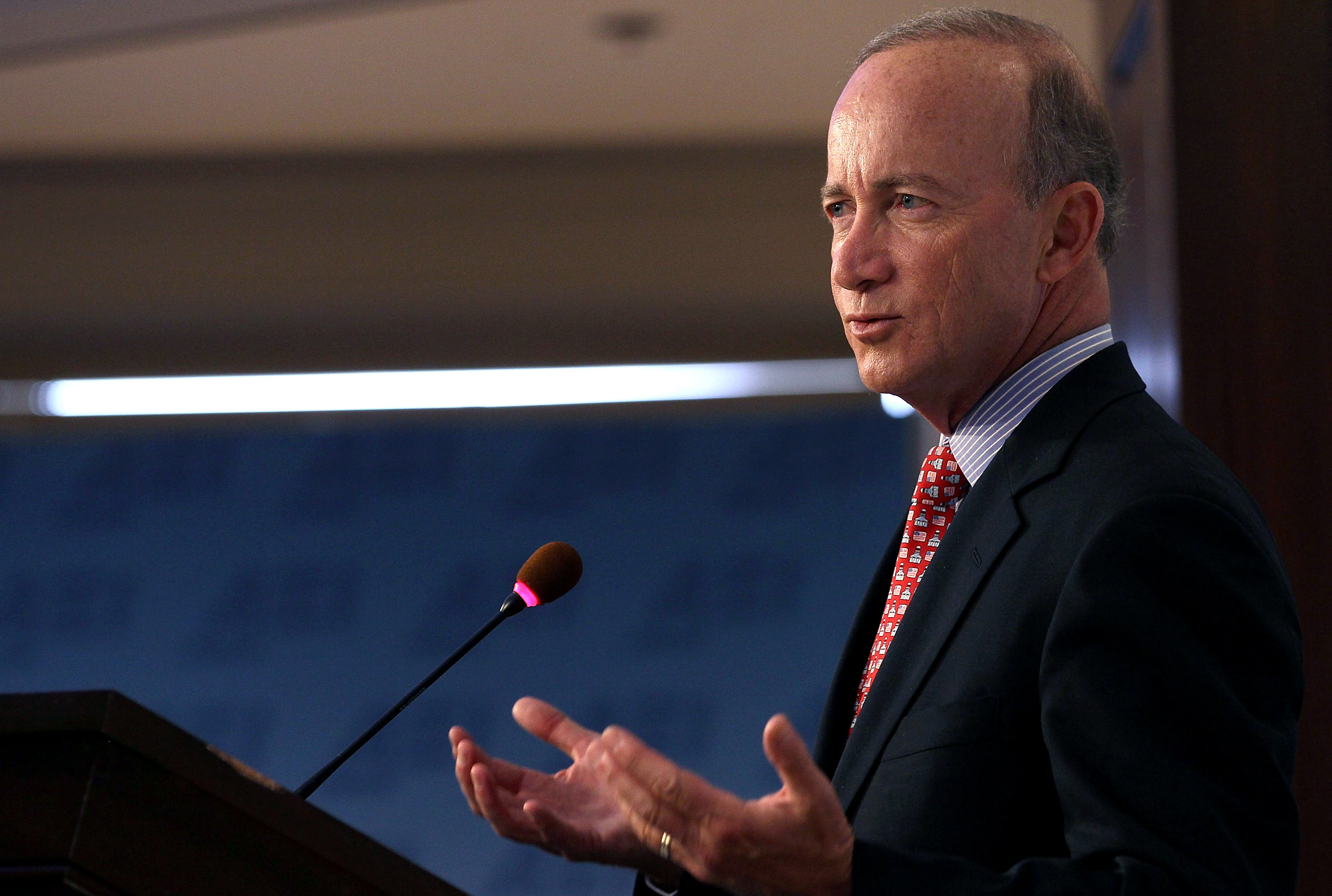 The latest front in the Republican civil war is set to erupt in the otherwise quiet state of Indiana.

Party officials and insiders are girding for an increasingly nasty primary battle for an open Senate seat between Rep. Jim Banks, who has declared, and former Purdue University president and former two-term Gov. Mitch Daniels, who appears increasingly poised to join the race. Daniels is expected to announce his intentions soon, according to one GOP senator. The ensuing fight could open years-old fault lines between the establishment and Trumpist wings of the party.

The former president’s orbit is taking a growing interest in the contest after Banks briefed Trump in a phone call last week on his intentions to run regardless of what Daniels decided, according to four people familiar with the call who spoke on condition of anonymity. Trump allies believe that the state’s 2024 Senate primary for the seat being vacated by Sen. Mike Braun could provide a crucial pulse check on the health of Trump’s brand and the ideological direction of the party.

The divisiveness of the primary — rising even before Daniels entered the race — has reached such a fever pitch that Rep. Greg Pence has weighed withdrawing his endorsement of Banks, according to two Republicans familiar with the matter. The Banks campaign hasn’t officially rolled out Pence’s endorsement yet, but Pence told POLITICO previously that he was endorsing Banks. A Banks’ spokesman declined to comment. Kyle Robertson, Pence’s chief of staff, did not return messages seeking comment.

Daniels is ensconced at his newly purchased home in Naples, Fla., where he has been golfing and fishing in recent weeks. He’s expected to visit Washington in the coming days to meet with past campaign advisers, according to two Indiana Republicans familiar with his plans.

He is also set to meet with Republican Sen. Tim Scott of South Carolina, part of what is expected to be a series of meetings with multiple Republican senators, according to five people familiar. Scott’s office declined to comment. Prospective candidates typically hold those types of meetings with top-party brass.

Trump allies aren’t waiting for those talks to end before they unload. In a series of tweets in recent days, Donald Trump. Jr. accused Daniels of being a “weak RINO,” “Mitt Romney 2.0,” and “Mitch Romney (RINO-IN).” In private conversations, the elder Trump has also made derisive remarks about the 5-foot-7 Daniels’ height, calling him a “midget,” according to two people with knowledge of his remarks.

In response, Mark Lubbers, Daniels’ closest advisor and confidante, has unloaded on what he has called the “Trump crime family” in recent statements.

At its core, the potential matchup would be an epic one. On one side there’s Banks — a 43-year-old up-and-comer who has tried to apply a MAGA touch to the GOP establishment. On the other is Daniels, a 73-year-old former Ronald Reagan aide who practices the genteel Midwestern conservatism of his late mentor, former Sen. Richard Lugar.

“Mitch frightens them,” Bill Oesterle, Daniels’ first campaign manager in his 2004 run for governor, said of the Trump wing of the party. Daniels’s candidacy would be “an existential threat to whatever is left of their waning influence.”

A spokesman for Indiana Republican Party chairman Kyle Hupfer pledged in a statement to POLITICO that it will stay neutral, as will Sen. Todd Young (R-Ind.). But national and state-based Republican operatives said they expect the primary would burn through tens of millions of dollars (Lubbers has told allies he would have $50 million in support from donors on the day he announces), and leave bruised feelings and charred reputations in its wake.

One national Republican strategist who works on Senate races predicted it would “be a bloodbath.”

At the heart of it is Trump, who once called Indiana “Importantville” for the decisive role it played in helping him secure enough delegates for his party’s nomination during the Republican primary in May 2016. His former vice president, Mike Pence, hailed from the state, and he once operated one of his casinos in Gary. A spokesman for Trump did not respond to a message seeking comment. The former president posted an article about Banks’ candidacy on Truth Social Wednesday.

Lubbers, who has long opposed Trump’s takeover of the party, said in an interview that the race could be “ground zero of the Republican Civil War.” Banks, he added “has become the proxy for beating everything that’s gone wrong since the grifters took over our party. This is Gettysburg. … Poor Banks has been given the role of George Pickett.”

A person close to Banks, in contrast, noted that “Donald Trump turned Indiana deep red,” adding that “if Mitch were serious about running, his best friend [Lubbers] and political advisor wouldn’t be badmouthing President Trump and his 1.7 million Hoosier voters to the media.”

Hoping to head off a bloody fight, at least one Republican intermediary with ties to both Trump and Daniels has reached out to Trump’s camp. The person said that while Daniels carries a quiet demeanor, he is not above getting into political knife fights.

Banks and Daniels had a cordial phone call last week, according to four Republicans briefed on the call, during which the younger Hoosier said he respected Daniels. Banks had organized an event on a northeastern farm for the former governor ahead of his first gubernatorial run nearly two decades ago.

Daniels, who had considered initially trying to clear the field by discouraging Banks from running, did not do so on the call. The reason, according to a person familiar with the call, was that he believed he could effectively contrast himself with Banks should he choose to run.

While Daniels would run on a platform seeking to restore the Reagan brand of Republicanism, he may also have to express support for some of Trump’s policies and emphasize his conservative governing record. There are interpersonal dynamics at play, as well: At a local GOP confab back when Banks was a state senator, Daniels once hailed him as the future of the party.

Further complicating matters is the Club for Growth, which has launched an ad backed by five figures that are running statewide and says Daniels is “not the right guy for Indiana anymore.” The group is willing to spend up to $10 million.

Club for Growth Action President David McIntosh and Daniels go back, as Daniels elbowed him out of the Republican gubernatorial primary in 2004. And allies of the former governor don’t hold back their pique at the spots being run.

“Club for Growth f–ked up because they basically forced Mitch to run with that ad,” this person said. “Mitch Daniels is a dude that plans out when he takes a s–t,” this person added, but the ad forces Daniels to defend his conservative record.

While Indiana Republican strategists speculated that the ad against Daniels was the result of lingering personal animosity McIntosh has for Daniels, Joe Kildea, a spokesperson for the Club, scoffed at the suggestion.

“It’s speculation, false, we won’t be dignifying it with a response, and it deserves no place in print,” said Kildea.

Still, the early volley was not universally going well in the state, Rep. Larry Bucshon, who endorsed Banks on Tuesday, bristled when asked about the criticism lobbed Daniels’ way, including Trump Jr.’s charge that he was RINO.

“Mitch Daniels has been a solid, conservative leader in the state for many, many years,” Bucshon said. “It’s unfortunate that people are making comments like that.”