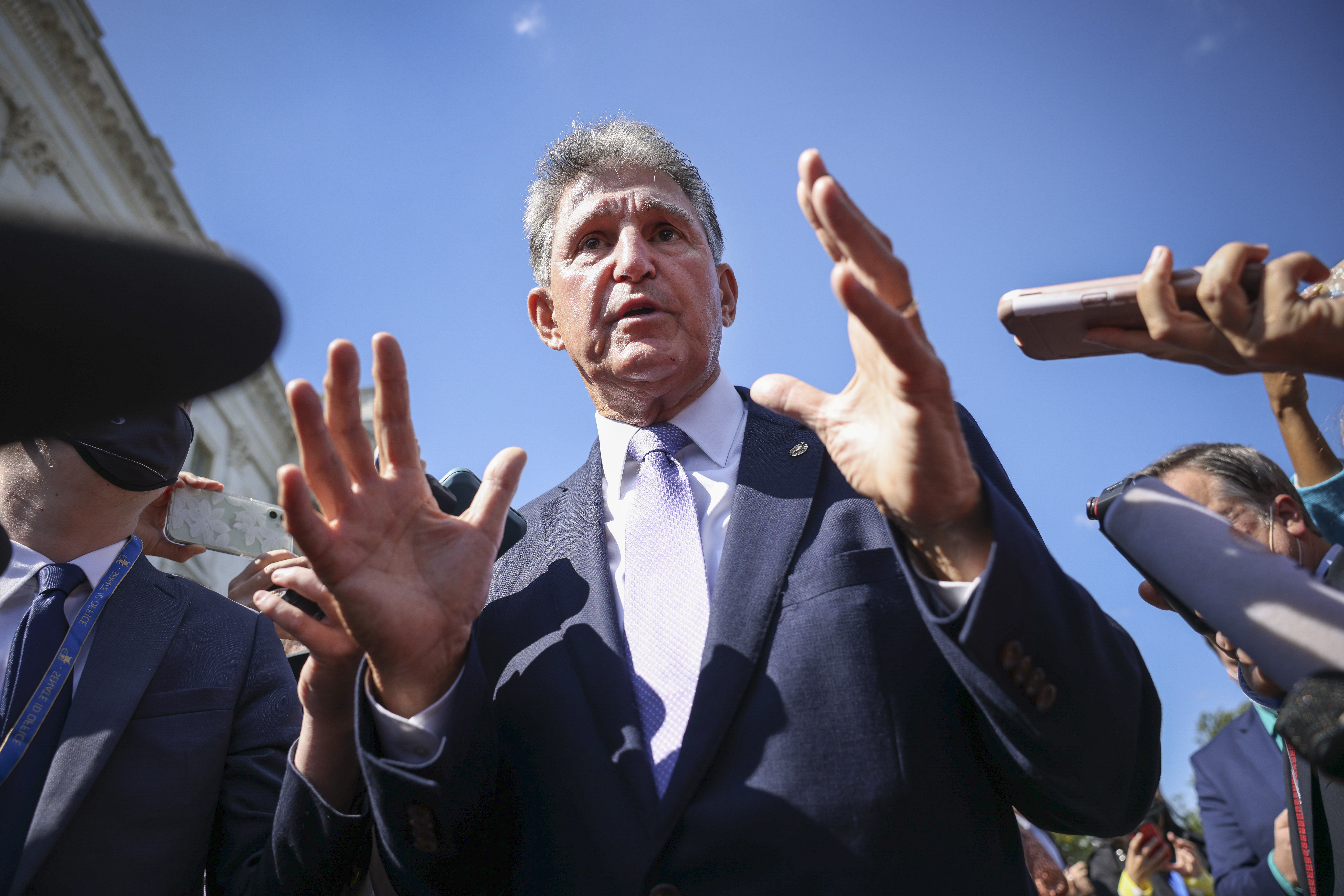 Their agreement, which came after Manchin had rejected climate and energy measures two weeks ago under the Democrats’ reconciliation package, is aimed at slashing carbon emissions an estimated 40 percent from 2005 levels economy-wide by 2030. But it also comes with plans to ease rules that the West Virginia senator has said are constricting fossil fuel production and slowing needed upgrades to the power grid.

“Holy shit,” said Tiernan Sittenfeld, senior vice president of government affairs with the League of Conservation Voters. “This deal is coming not a moment too soon.”

Lawmakers and climate advocates — who had been hammering Manchin in recent days for rejecting the climate measures because of inflation concerns — were ecstatic at the surprise announcement.

“There’s been a ton of work done over the last two weeks to make the case to Sen. Manchin that this package is not inflationary and address his concerns in a serious way,” said Jason Walsh, executive director of the BlueGreen Alliance, a coalition of labor and environmental groups. “And we’re just thrilled that we’re at this moment,” he added.

People familiar with the effort to bring Manchin back to the table on climate said there had been an intensive effort to convince him of the merits of supporting the new technologies — including from company executives who came forward with new plans to build manufacturing in West Virginia.

Labor leaders and experts from universities were also part of the effort, as was former Treasury Secretary and inflation hawk Larry Summers, who met with Manchin in recent days, said Walsh.

The bill, if passed, would be a major victory for President Joe Biden’s climate agenda that had suffered a serious setback at the hands of the Supreme Court in June, and could help generate new enthusiasm from Democratic voters who had grown frustrated with the administration’s lack of success.

“We will improve our energy security and tackle the climate crisis — by providing tax credits and investments for energy projects. This will create thousands of new jobs and help lower energy costs in the future,” he said in a statement.

Sens. Tina Smith of Minnesota, John Hickenlooper of Colorado, and Chris Coons of Delaware were among a small group of Democrats who, along with their staffs, kept up discussions with Manchin and his aides in recent weeks.

“[We] came together on how to address Sen. Manchin’s very important concerns on inflation and pulled together good sources of information on that and reminded everybody it’s not over till it’s over, and never say never,” Smith said in an interview.

The result of those talks, she said, “is the most significant action on climate and clean energy we’ve ever taken.”

Rep. Ro Khanna of California, a progressive who is close with Manchin, also stayed in touch with him in recent weeks and said he spoke with him Wednesday night after the agreement with Schumer was announced.

“Sen. Manchin always expressed a willingness to invest in solar, wind and the next generation of innovation. Every conversation I have had with him, he was very consistent on that point,” Khanna told POLITICO.

The legislation would pour $370 billion into “energy security and climate change” measures, far higher than the $90 billion for clean energy incentives in President Barack Obama’s 2009 American Recovery and Reinvestment Act.

The figure is roughly in line with funding levels discussed earlier in July among Senate Democrats that called for about $300 billion in tax credits for a slate of clean energy technologies, including solar and wind power, energy storage, carbon capture, hydrogen and small-scale nuclear power.

The package is not expected to include broad measures that would send direct payments to companies for most of the tax credits, but will include that direct-pay option for domestic manufacturing for a period of five years, according to two people familiar with the negotiations.

The inclusion of those direct payment marks a win for domestic manufacturers, who have for weeks argued that refundability is crucial for driving expansion, particularly because manufacturers do not have the same access to tax equity structures as wind and solar project developers.

The bill is also expected to include a $7,500 credit for electric vehicles and a smaller credit for buying used EVs, said Fred Krupp, president of the Environmental Defense Fund.

He added the package also includes a fee on oil and gas companies’ methane emissions that would begin in 2025 and would send $60 billion to low-income areas and communities of color that face disproportionate environmental pollution.

The legislation, which is expected to reach the Senate floor next week, is part of a deal that calls for Congress to pass changes to permitting, an issue that has drawn support from many Democrats who would like to see quicker approvals for wind and solar farms as well as power lines to transport the clean electricity. And it is likely to get support from Republicans eager to speed new pipeline approvals and quicker access to oil, gas and mineral deposits.

Manchin had long sought permitting changes, seeing them as key to opening new energy development and spurring infrastructure projects. But such measures would have run afoul of the rules for reconciliation, meaning a side agreement would have been necessary to appease his concerns.

That side deal for permitting changes drew criticism from the powerful National Association of Manufacturers, which said Congress should simply have moved forward that effort on its own rather than tying it to the reconciliation package.

“There is nothing that prohibits Congress from doing exactly that right now,” President and CEO Jay Timmons said in a statement. “Any member of Congress who is voting for the bill based solely on that language should not do so and should instead push to have a standalone bill considered.”

Rep. Jared Huffman (D-Calif.), who had criticized Manchin for rejecting climate provisions in the bill earlier this month, said he was encouraged by the new deal, though he was eager to see the language.

“We have been saying for months investments in clean energy are not inflationary. If Manchin has come around to that view, that’s a good thing,” he said in an interview.

Some climate activists said the investments in clean energy outweigh concerns that easing permitting rules could lead to the buildout of more fossil fuel infrastructure such as pipelines.

“There will be some difficult tradeoffs but it’s going to be 10 times as much good stuff as bad stuff,” Leah Stokes, a UC Santa Barbara professor who worked with Democrats on climate provisions of the package said in an interview. “People are going to have to be clear-eyed about how critical these investments are to making progress on cutting climate pollution.”

Hickenlooper praised the bill as a major victory after conversations behind the scenes with staff and key senators.

“I don’t think I’ve been happier,” he told POLITICO. “This is like, better than getting elected in terms of happy.”