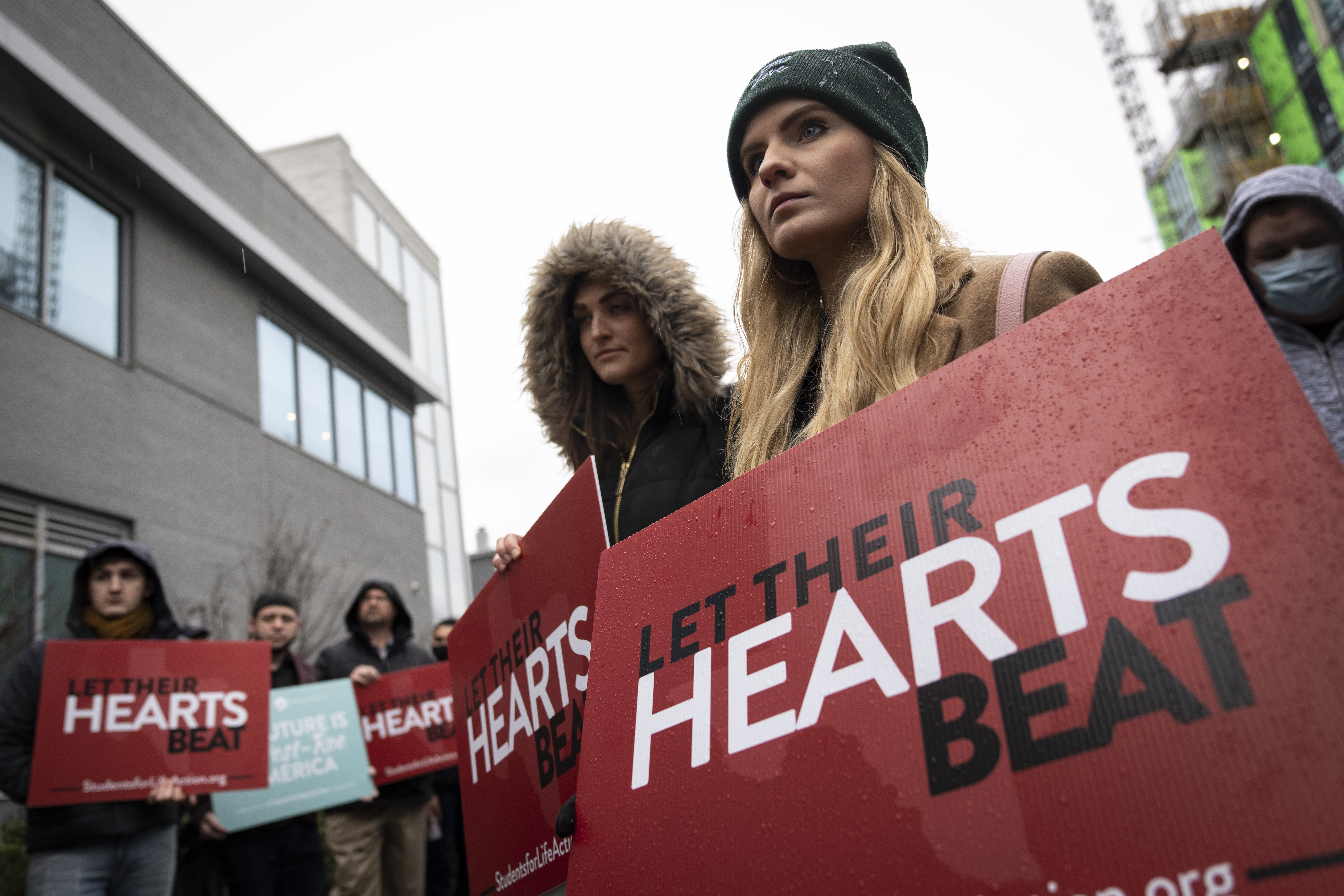 Fresh off winning their decades-long battle to overturn Roe v. Wade, abortion-rights opponents are pinpointing their next targets: the nation’s biggest pharmacy chains.

Anti-abortion advocates are organizing pickets outside CVS and Walgreens in early February in at least eight cities, including Washington, D.C., in response to the companies’ plans to take advantage of the Food and Drug Administration’s decision last week allowing retail pharmacies to stock and dispense abortion pills in states where they’re legal.

The demonstrations aim to bring the same chants, signs and tense confrontations to drug store parking lots that groups have long used to try to deter visits to abortion clinics. The protests will coincide with a call-in campaign and planned national boycott of the chains.

“We want people to be uncomfortable going into a CVS that has a demonstration going on and to consider going to a different pharmacy,” said Caroline Smith, a leader of the group Progressive Anti-Abortion Uprising. “We also want to put enough pressure on the companies to retract this decision and not get certified to sell abortion pills.”

A Walgreens spokesperson declined to comment on the protests. CVS did not respond to a request for comment.

The anti-abortion movement is zeroing in on pharmacies as the pills have become the most popular method for terminating a pregnancy in the U.S. and a key way people are accessing abortion in states where it’s banned.

The upcoming protests are just one piece of a broader strategy that, if successful, could further fray the national patchwork of access to abortion.

As legislatures reconvene this month — many for the first time since Roe v. Wade was overturned — Missouri and Kansas are among several states weighing bans on mail delivery and pharmacy dispensing of mifepristone, the first of two pills used to terminate a pregnancy.

Members of the new House Republican majority will also put forward a bill on Wednesday, first shared with POLITICO, that would expand the rights of pharmacists to refuse to fill prescriptions for the drug.

And conservative advocates are threatening legal action against pharmacies that opt to dispense the pill as other pending lawsuits seek to ban their use nationwide.

“If Walgreens wants to learn anything from more than 50 years of our abortion activism, it’s that we will not give up,” said Kristi Hamrick, the vice president of policy for Students for Life of America. “They should be concerned about the kind of liability they will face.”

These conservative plans threaten to curtail what progressives call an already limited effort to expand access to abortion — and discourage patients from seeking the pills even if pharmacies opt to provide them.

Progressive lawmakers and abortion-rights advocates initially cheered the FDA’s January announcement, saying it could make the drugs more widely available, even as more states move to impose restrictions. They also expressed hope that the policy could reduce stigma around the use of the pills by treating them more like other prescription medications.

But as details of the policy came to light, many on the left raised concerns that its impact would be limited for several reasons, including low participation from pharmacies due to red tape, cost to patients, and new state laws targeting the pills’ distribution.

“The safety of pharmacy teams is really important, and that’s something they’re going to take into consideration when they decide whether or not to become certified,” said Ilisa Bernstein, the interim CEO for the American Pharmacists Association. “In some communities, that may be more of a concern than others, but it is a concern.”

Rachel Rebouché, a reproductive health law expert and dean of Temple University’s Beasley School of Law, said she doesn’t think the certification process FDA has outlined for pharmacies is “super onerous,” but the tracking and records requirements may deter pharmacies that aren’t accustomed to handling these sorts of restrictions from seeking certification, especially small independent operations.

“It’s kind of focused on diversions — how you would police a controlled substance to make sure it’s not being overprescribed, that people aren’t stockpiling, for instance, medication abortion,” Rebouché said.

Everyone involved in the manufacturing, distribution and regulation of mifepristone is trying to “avoid a single database” of records of prescribers and patients, said Ronna Hauser, the senior vice president of policy and pharmacy affairs for the National Community Pharmacists Association.

The prospect that some pharmacies might be dissuaded from dispensing the pills even in states where they remain legal has some medical groups and progressive advocates arguing the FDA should have dropped all of its restrictions.

“The FDA could have taken the opportunity to greatly simplify the process,” said Ushma Upadhyay, a professor at the University of California at San Francisco’s school of medicine and researcher with the group Advancing New Standards in Reproductive Health. “Medication abortion is extremely safe. Many studies have found severe complication rates of less than half of one percent. And we know pharmacies dispense other drugs with much greater risks without all these restrictions and certification requirements.”

Cost could prove another barrier to patients accessing the pills.

The average retail price of one mifepristone tablet — the amount needed to begin a medication abortion — is about $75, according to prescription drug price tracker GoodRx.

The biggest reason the pills won’t be available at all pharmacies, however, will likely be the growing number of state laws dictating how patients can obtain them or banning them outright.

Pharmacies in 18 states are barred from dispensing the drugs either because abortion is illegal in most circumstances or because patients can only get the pills directly from a physician. More GOP-controlled states are expected to enact pill-specific restrictions this year — including states where abortion is already banned.

“They’re trying to deter people from going online and getting pills and, in their minds, close gaps in their current law,” explained Elizabeth Nash, who tracks state policy for the pro-abortion rights think tank Guttmacher Institute. The new FDA policy around pharmacy dispensing of the pills, she added, “put a spotlight on medication abortion right as these state legislatures were coming back into session.”

Some of these laws under consideration, in Texas and other states, are focused on expanding federal laws that allow health care providers, including pharmacists, to opt out of providing services to which they have a moral or religious objection.

Rep. Buddy Carter (R-Ga.) plans to reintroduce a federal version on Wednesday that bars employers or the government from penalizing any health worker who refuses to fill a prescription for any medication that he or she “in good faith believes may be used to cause an abortion.”

Though it’s not expected to pass the Democratic-controlled Senate, medical groups have raised concerns that such a policy could exacerbate the already acute problem of patients being denied drugs prescribed for other purposes — from lupus to arthritis to miscarriage management — because they also can be used to end a pregnancy.

Even if they can’t enact new laws or block the new pharmacy distribution policy in court, anti-abortion forces say they will continue working to chip away at its impact, employing the “death by 1,000 cuts” strategy they relied on for decades that eventually brought about the elimination of abortion access in a quarter of the country.

“The idea that we’re going to stand by while there’s a reckless distribution of abortion pills is very short-sighted,” Hamrick said. “We have a much savvier operation now than when Roe became Roe.”