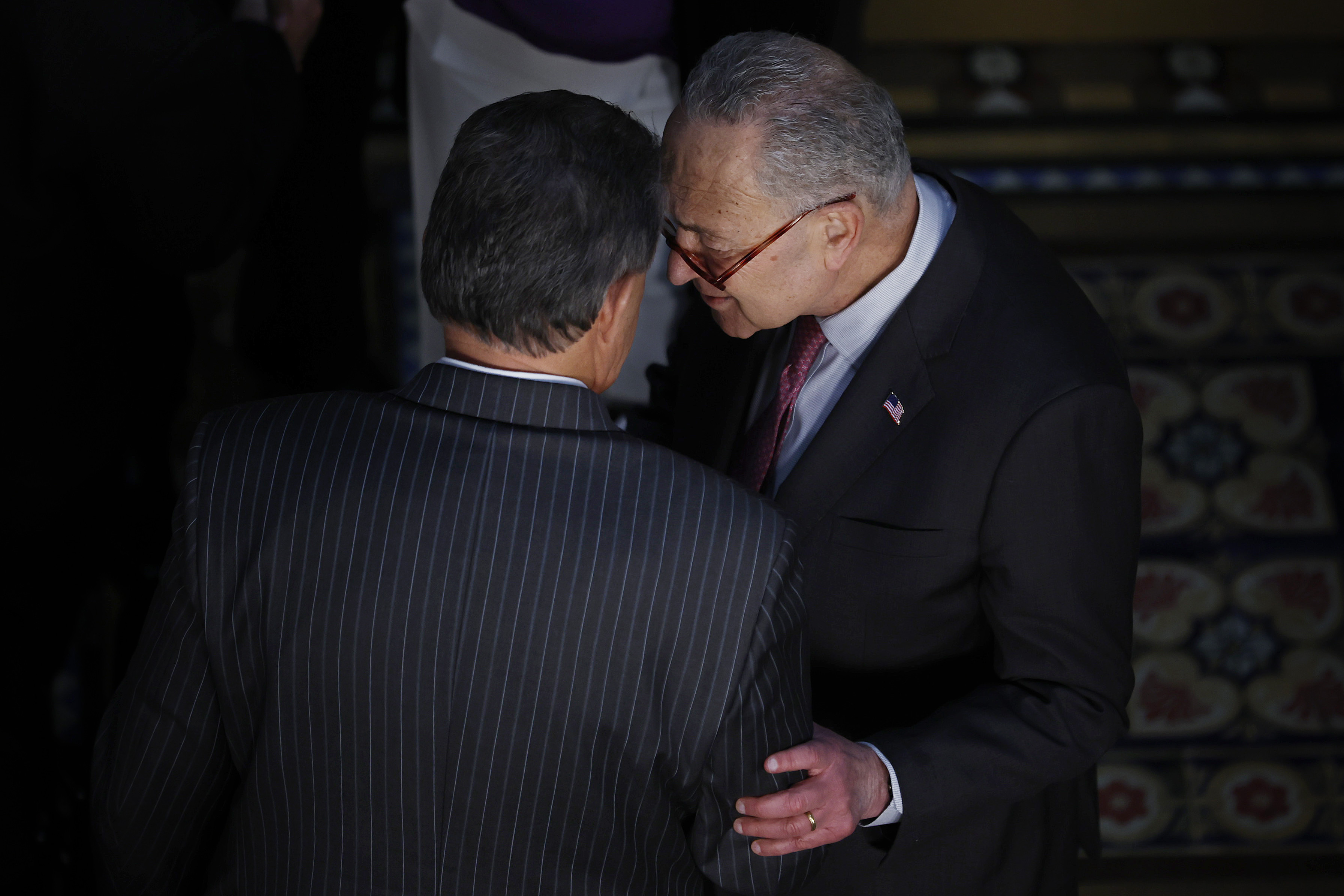 Almost every Senate Democrat is locking arms to push their $700 billion-plus climate, tax and health care bill past the chamber’s strict rules for avoiding a filibuster. Kyrsten Sinema is still a question mark.

The Arizona Democrat has not commented on the legislation and isn’t expected to do so until she reviews the text and the rulings from the Senate parliamentarian, according to her spokesperson. At the moment, with the package set to reach the floor as soon as the middle of next week, her timeline for reaching a decision is uncertain.

Sinema previously expressed support for addressing climate change in a party-line measure and struck a deal with Democrats last year to lower prescription drug costs. But she’s also resisted at least one provision in the bill: closing what’s known as the carried interest loophole, which currently allows certain financial firms to pay lower tax rates on their earnings.

The deal between Senate Majority Leader Chuck Schumer and Sen. Joe Manchin (D-W.Va.), announced Wednesday, surprised most caucus members, many of whom found out about it via Manchin’s press release. Senate Democrats remain confident they’ll have all 50 members, including Sinema, in the end.

Still, one person who spoke to Sinema described her as “frustrated” at not being looped in, while another person who talked to her said she was “totally shocked.” And Republicans think she’s their only chance at stopping the deal.

“She was not consulted,” said Sen. John Cornyn (R-Texas), who worked with Sinema last month to pass a bipartisan gun safety bill and lambasted Manchin repeatedly over the past 24 hours. By contrast, he added, “I know I can trust her when she tells me something. I’m beginning to think I can’t trust other people around here when they tell me something, because they so routinely lie about it.”

Democrats convened for a private caucus meeting Thursday morning to discuss the stunning Wednesday deal. During the meeting, Schumer touted the agreement and urged his caucus to pull out all the stops in order to get the bill passed before leaving D.C. for Congress’ usual summer recess.

Sinema did not attend the meeting. And Schumer repeatedly declined to comment on her potential vote. “You saw what she said. So I say, no comment. I’m not going to talk about Sinema, period.”

Manchin, meanwhile, told reporters he had not spoken to her but said he hoped “she would be receptive.” He added that he’s “adamant” on closing the carried interest loophole.

During talks last year on Democrats’ party-line vision, Sinema reached a deal with the White House on a menu of revenue options to finance it. In March, she said that a potential deal with Manchin “already has enough tax reform options to pay for it.”

“There’s a few rocks in the river in front of us because every senator, myself included, has something that I wanted in this package that’s not in it,” observed Sen. Chris Coons (D-Del.). “Getting through the process from here to completion is going to be an interesting run. But I’m optimistic we will get there.”

And some don’t think Sinema has any other option but to support the deal in the end. Rep. Raúl Grijalva (D-Ariz.) said “her state is going to need her on this” and she “politically doesn’t have a choice.”

In addition to the whip count, passing the package by next week without a single GOP vote won’t be easy. Democrats are already diving into a behind-the-scenes scrub to ensure the bill complies with the special budget rules that allow them to evade a filibuster. But that slog could eat up pivotal time over the next week — and result in the nonpartisan Senate rules referee knocking out portions of the proposal.

And all that could play out in real time, with Democrats forced to litigate parts of their marquee party-line bill against Republican challenges as it’s being considered on the floor. There’s also the unlimited so-called vote-a-rama spree, where any senator, including Sinema, can seek to change the bill by offering amendments.

In a sign that Republicans will put up a tough fight against the package, Senate Minority Leader Mitch McConnell said Democrats have produced “an absolute monstrosity, and we’re going to be really aggressively in opposition.”

Schumer also suggested Thursday that Democrats will try to add more provisions to the party-line legislation during floor consideration, such as a proposal to reduce the cost of insulin. Republicans suspect such moves may run afoul of Senate budget rules.

Senate staffers in both parties are still in the thick of privately working with the chamber’s rules arbiter, otherwise known as the parliamentarian, to vet the bill’s drug pricing provisions against the budget rules. News of the deal between Schumer and Manchin sent aides scrambling, trying to figure out which pieces of the emerging package have yet to receive much procedural scrutiny behind closed doors.

The high-stakes rules drama began playing out Thursday when Manchin took a victory lap of sorts after unveiling his deal with Schumer.

“I just felt there was an opportunity here to really give us an energy policy with security that we need for our nation but also driving down the high price of gasoline,” the West Virginia centrist told reporters of the proposal he pushed to rename the “Inflation Reduction Act” — a pointed messaging turn as signs of a recession began appearing Thursday.

On top of the parliamentarian’s scrubbing, Democrats will need full attendance from their 50-member caucus in order to pass the bill. Underscoring how difficult that will be to pull off, Senate Majority Whip Dick Durbin (D-Ill.) tested positive for Covid Thursday; the caucus hasn’t had all 50 members voting since the start of the month.

“Of course we are” worried about Covid-related absences, said Sen. Elizabeth Warren (D-Mass.). “This morning about 45 of us met in a room designed to hold hundreds. We sat spaced out and wore our masks. Otherwise almost everything has gone to online.”

Manchin and Schumer shocked many of their colleagues Wednesday by announcing a deal that would include $369 billion in energy and climate change spending, reduce the deficit by $300 billion, allow Medicare to negotiate the cost of some prescription drugs, provide three years of Affordable Care Act subsidies, and make changes to the tax code.

The duo received final fiscal scores for their burgeoning agreement from the Joint Committee on Taxation late Tuesday night, according to a Democrat familiar with the deal. Staff met the next morning, and by early afternoon Schumer and Manchin convened over Zoom and had a handshake deal.

Manchin denied that he and Schumer waited to announce their agreement until after some Senate Republicans supported bipartisan legislation to boost U.S. semiconductor manufacturing. He also underscored that President Joe Biden was not involved in the crafting of the deal, warning “it could have absolutely gone sideways” with the White House’s involvement.

Manchin hinted at compromises environmental advocates and other Democrats will likely have to swallow to make the bill come to fruition, such as energy project permitting that he secured a promised vote on. He said the legislation will ensure a “robust, clean fossil energy industry.”

Summing up the give and take about his colleague’s fossil-fuel requests, Schumer said: “Senator Manchin wanted certain things in the bill that the vast majority in our caucus didn’t want. But we had a North Star: 40 percent reduction in carbon.”

Caitlin Emma and Jordain Carney contributed to this report.