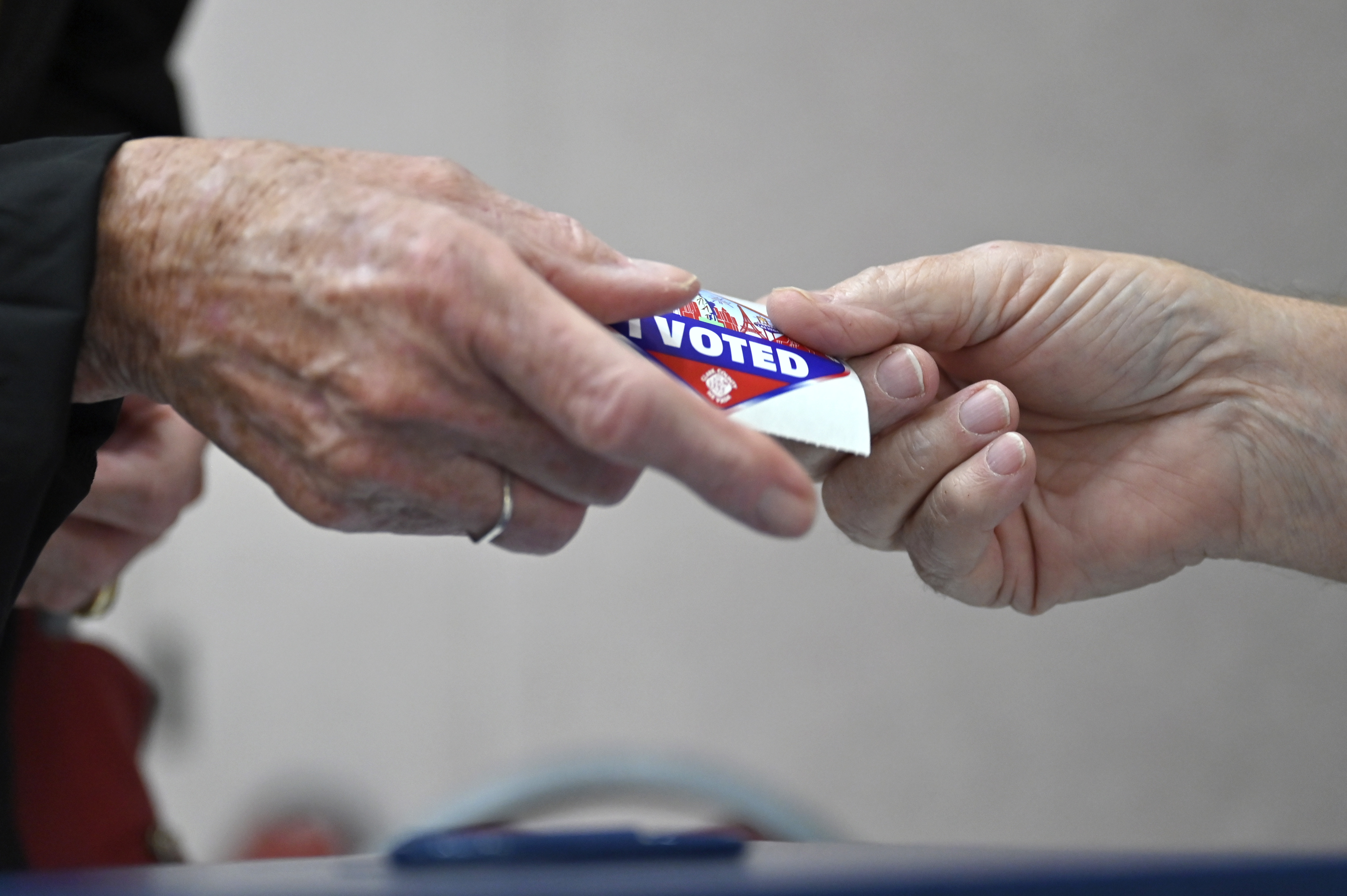 Rick Scott has no regrets about his Senate Republican campaign arm’s hands-off approach to primaries this year — a move that anointed a motley crew of nominees, some of whom cost the GOP dearly.

Looking at this year’s strategy by the National Republican Senatorial Committee that he once directed, Steven Law takes a different view.

“It seemed to us that the posture of the committee was that all candidates are equally great,” said Law, who now runs the Mitch McConnell-aligned Senate Leadership Fund super PAC. “And I just don’t think that’s objectively true.”

With Arizona Democrat Sen. Mark Kelly on the brink of defeating Blake Masters, one of five liability-ridden GOP nominees, Republicans may now head into a pivotal Georgia run-off staking the last of their Senate hopes this midterm on an unproven and scandal-plagued Herschel Walker. The GOP can still win the majority if it knocks off Sen. Catherine Cortez Masto (D-Nev.), but it blew an opportunity to grab the Senate in November despite obvious political advantages.

How that happened is the story of a larger, existential struggle within the GOP. Interviews with more than 20 strategists and senators from both parties highlight the reasons for Republicans’ stumbles this year: former President Donald Trump played kingmaker, and the party reasoned it could do little about it besides trying to ride historical tailwinds.

Senate Republicans’ disinterest in further damaging their fractious relationship with the former president saddled them with losing candidates in Pennsylvania, Arizona and New Hampshire as popular governors took a pass on running. And the chip still on Scott’s shoulder from his own 2010 gubernatorial primary — where he toppled an establishment favorite — shaped the NRSC’s approach this cycle, for better or worse.

When it comes to primary intervention, the Florida senator sees it simply: “I don’t think that’s the job of the D.C. crowd.”

Nonetheless, many Republicans spent the week feeling caught in a replay of 2012 and 2010, when poor GOP nominees squandered winnable races and cost them shots at the Senate. McConnell publicly warned back in August that candidate quality matters, especially in Senate races — a clear jab at the party’s recruitment. The NRSC chair conceded later they had a “strategic disagreement.”

And it festered right up to Election Day.

Democrats had their own problems, including an unpopular president and rampant inflation. Several of their incumbents were on defense in battleground states. Yet they also capitalized on the jolt to their base delivered by the Supreme Court’s reversal of Roe v. Wade, raising gobs of money while investing heavily in their field operation and separating themselves from President Joe Biden.

And they couldn’t have outperformed history without some help from the GOP.

“They completely fucked up recruitment,” said Christie Roberts, the executive director of the Democratic Senatorial Campaign Committee. “We had no business being in the hunt to hold the majority in this environment.”

The GOP’s recruitment stumbles ended up coloring the entire general election campaign, forcing Republicans to narrow their sights because of money woes that can be traced all the way back to Trump. In the end, Law’s super PAC spent $240 million, more than 10 times what Trump did in the general election.

But a rich super PAC alone can’t solve everything.

Trump ended the Senate primary season with a near-pristine endorsement record, other than a bungled nod in Alabama and vague backing of two candidates named “Eric” in Missouri. But after winning their primaries, the former president’s favorite candidates faced new problems: bruised favorability, reluctant donors and Democratic incumbents who had been running general election campaigns for 18 months.

When Republicans reviewed mid-year fundraising numbers, their jaws dropped. In the most competitive Senate races, Democrats had nearly $80 million on hand; Republicans had less than $20 million. Law said it was “the wake-up moment for us.”

In Nevada at least, Republicans got their man. Adam Laxalt clinched the former president’s support early on and was not only publicly embraced but closely advised by McConnell’s inner circle.

Laxalt avoided the intraparty personality wars that weighed down many other soon-to-be GOP nominees this cycle.

“He was the only candidate in the entire country who had that sort of unifying beginning to his race for Senate,” recalled John Ashbrook, a McConnell adviser who also worked on Laxalt’s race. The race remains too close to call.

An even redder state surprised everyone. After Sen. Rob Portman (R-Ohio) announced his retirement, Democratic Rep. Tim Ryan made good on past flirtations with statewide bids — and even worse for Republicans, his message resonated. Surmising that Ryan was a “pretty stellar” candidate, Law committed more than $32 million to his race against Vance.

That decision underscored McConnell’s focus on a narrow playing field that meant holding every GOP seat and shooting for a slim majority. But that approach sparked controversy.

The Senate Republican super PAC also made a late primary-season play to derail Donald Bolduc in New Hampshire by boosting a more moderate opponent, then later infuriated conservatives by abandoning him and Masters in the general election.

Slashing general election spending in theoretically winnable states to home in on battlegrounds was a divisive choice, but Law prioritized defending Republican-held seats over chasing aspirational pick-ups. The results were mixed.

Things came to a head on Oct. 20, when Law got bad news at the super PAC’s regular polling meeting. After fighting his way back from a months-long double-digit deficit and nearly closing the gap with Democratic rival John Fetterman, Oz had slipped back down a point. Democratic outside groups were pouring in millions more dollars to boost Fetterman, who had reached his most vulnerable point of the cycle, and Republican donors were panicking.

Around a conference table at the 3 p.m. meeting, the mood was sober. On the wall across from Law, a portrait of a grinning McConnell loomed over the group, as did one of retiring Sen. Pat Toomey (R-Pa.).

Pennsylvania is for all the marbles, Law recalled thinking to himself. Something has to give.

That something was New Hampshire, a state where GOP nominee Bolduc refused to back down from opposition to McConnell as majority leader. New Hampshire was too tough for Republicans to flip, Law believed, and Oz’s candidacy was a safer bet.

“It just suddenly became crystal clear that if we win this race, we probably win the majority,” Law said of Pennsylvania in an interview.

That wasn’t how other Republicans saw it.

Citing his NRSC’s late ad buy in New Hampshire, Scott said the campaign arm “clearly disagreed” with the super PAC down the stretch. The super PAC’s decision to pull cash from Arizona landed with a similar thud in some corners of the party.

Always a player on the Hill, Heritage Action wanted to make a bigger impact when it kicked off its new Sentinel Action Fund with a late-April fundraiser in Amelia Island, Fla. Heritage Action Executive Director Jessica Anderson hoped to solidify conservative outside support with her launch as traditional allies like the Chamber of Commerce took a step back from longtime roles as leading funders of GOP candidates.

Then came August, when the McConnell-linked super PAC announced it would begin to cancel its fall reservations in Arizona. Anderson got wind of its plans two days beforehand. Law told her in a phone call that Masters was a “bridge too far,” but did not elaborate on what he meant. He explained later that he did not recall using the phrase, but saw the state as a long shot.

Sentinel eventually spent $8 million as the race tightened as well as nearly $2 million in New Hampshire.

“We can’t pull out of races nine weeks out. We just can’t,” Anderson said in an interview. “It’s just crazy to me.”

Yet the numbers seem to validate the ruthless approach: Masters was down 6 points and running behind all other statewide Republicans as of Friday — and Bolduc ultimately lost by nearly 10 points.

As it turned out, the Democratic Senate campaign arm nearly mirrored the GOP super PAC’s late focus on battleground states. But it started down that path early on, prioritizing protecting incumbents in four swing states and reaching for a pick-up in Pennsylvania.

Biden won both Wisconsin and Pennsylvania in 2020, but the DSCC focused on the latter, concluding that the Badger State would be tougher in a midterm year and Republican incumbent Ron Johnson was reasonably battle-tested. And Sen. Gary Peters (D-Mich.), who chaired the campaign arm, said he felt “fairly strongly” opposed to blowing money on primaries in Pennsylvania and Wisconsin, where Lt. Govs. Fetterman and Mandela Barnes eventually prevailed.

“We needed to marshal all of our resources first and foremost to protect incumbents,” Peters added in an interview.

Midterms are invariably stacked against the party in power, so Democrats had to run ahead of Biden’s low approval ratings and confront rising prices. That wasn’t always easy; as their candidates sought to connect with voters about the pain of inflation, top Democrats working on Senate campaigns recalled privately grimacing when the White House touted positive statistics about the economy.

Yet in a bright spot for Democrats, their Senate candidates raised record-breaking sums. That allowed the DSCC to spend more money on field and voter programs than on TV ads for the first time in modern history.

Then came the Supreme Court’s decision to overturn Roe, a “huge” motivator for a base that until then “was asleep,” DSCC executive director Roberts said. And the Democratic Party got one last ray of sunshine this summer: an end to the infighting.

Though Republicans believed the tax increases and enhanced IRS enforcement used to fund the bill would weigh Democrats down, the majority party instead saw something tangible to tout.

“I knew it would allow our candidates but particularly our incumbents, to point to specific accomplishments,” said J.B. Poersch, president of the Chuck Schumer-aligned Senate Majority PAC. “Being able to say, ‘here’s something we’re actually getting done,’ there’s more power in it.”

Georgia on their minds

The 2022 midterms will end where the last cycle left off, with a December run-off that could determine control of the chamber.

Immediately after Democrats won two Senate races in the once solidly GOP state and took the Senate two years ago, the Senate Republicans’ campaign arm quickly conducted a postmortem: Why had they fallen in Georgia?

“The donors were pretty furious,” Scott said. “I explained to everybody how we were going to do it differently.”

The NRSC assembled as large a GOP coalition as possible for meetings last summer, reaching a single conclusion about how Sens. Raphael Warnock (D-Ga.) and Jon Ossoff (D-Ga.) prevailed in 2020. Republicans hadn’t spent early enough, they found, while Democrats built up valuable early credibility with voters that proved virtually untouchable.

So this year, Republicans tried to define Warnock as a Biden lackey rather than the “radical” attacks they previously attempted. But they ended up with a bigger problem on their own side: Walker was famous in Georgia for his football exploits, but voters were just learning about his personal baggage.

He had allegedly threatened his ex-wife and bore secret children. Two women alleged that he paid for an abortion — even as he claimed publicly to oppose abortion rights. Yet Republicans stood by the Trump-backed nominee, reasoning that if the former president could win in 2016 with comparable problems, Walker could do the same.

“I honestly think that more people are desensitized to some of that information,” explained one Republican senator.

Yet when the ballots came in Georgia, Walker’s problems were evident. Gov. Brian Kemp ran roughly 5 points ahead of the Senate nominee, winning outright while Walker struggled to force Warnock into a run-off. And Democrats are confident that, come December, their nominee will prevail again.

“There’s no question,” Peters said, “that Raphael Warnock is a superior candidate.”

Holly Otterbein contributed to this report.