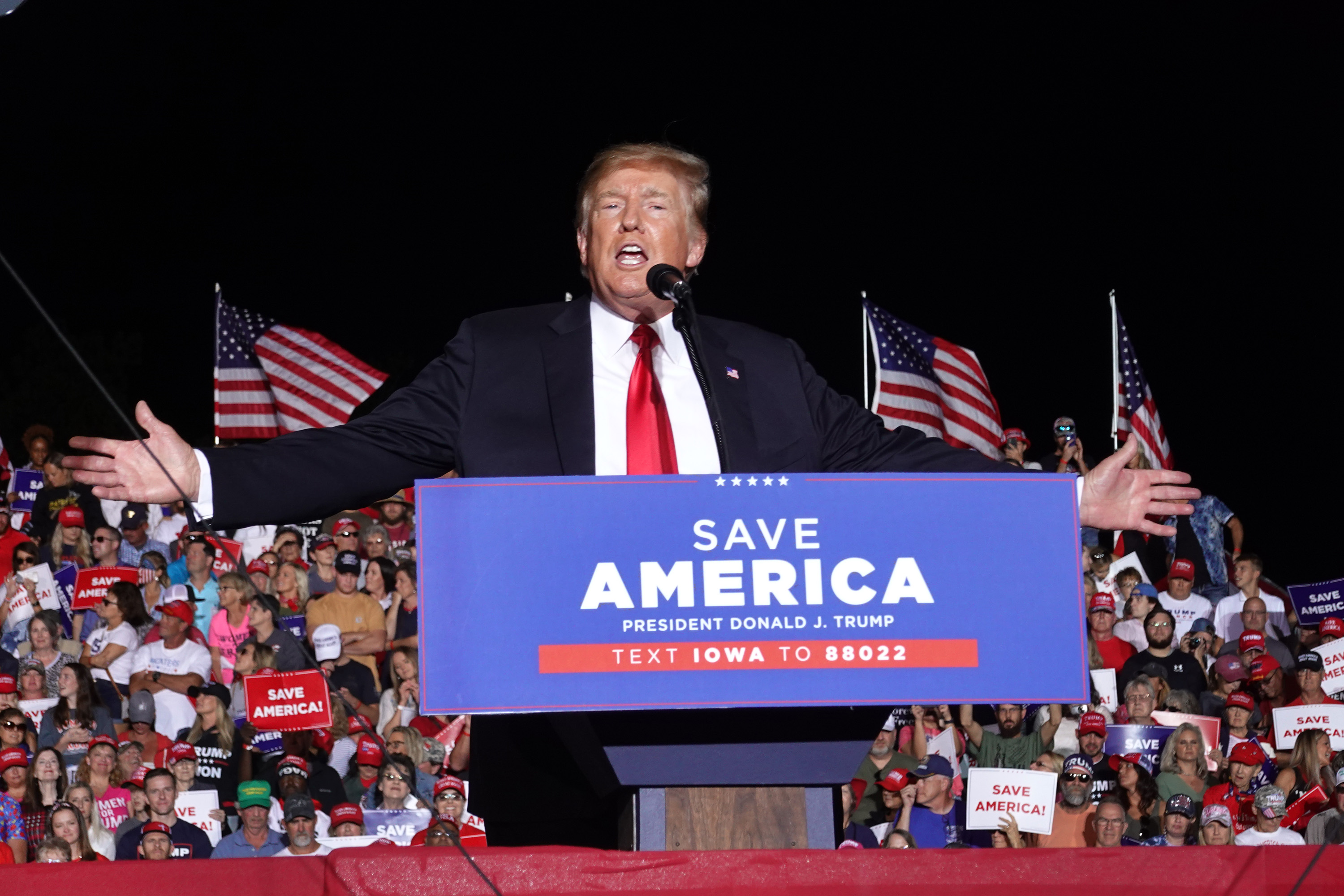 Donald Trump’s flirtations with launching a third presidential run during the Jan. 6 select committee’s probe might as well be a grenade inside the GOP’s midterm strategy. And Republicans aren’t sure how to defuse it.

Party leaders want Trump to hold off on any campaign announcement at least until after November’s midterms so the GOP can make the 2022 elections a clean referendum on President Joe Biden. They see a clear road map toward netting the handful of House and Senate seats they need to flip Congress, with a twice-impeached former president still under investigation possibly blocking their path.

“The political landscape and environment is favorable. And I think the fewer disruptions, obviously, the better,” said Senate Minority Whip John Thune (R-S.D.), who just won his primary after Trump had vowed to take him out. “Anything you have that takes you off of what your message is, or creates distractions, is obviously something you’d have to adapt to.”

The Republican Party is plainly still struggling to deal with Trump more than seven years since he launched his first presidential campaign and nearly 18 months since he left office. GOP leaders need his loyal voters to win general elections this fall, but they do not want their incumbents or candidates talking about Trump — just about how unpopular Biden is and how high inflation is on his watch.

The clean break from Trump that some Republicans and almost every Democrat in Congress had hoped for is clearly never coming — instead leaving a party where the former president still vexes leaders but most refuse to fully confront him. The 17 congressional Republicans who supported Trump’s second impeachment are outliers at best and outcasts at worst.

But the Trump vise pressures every Republican differently, and there’s still a wing of the party that wants him to announce ASAP if he’s planning on running in 2024. This GOP group says that if Trump is going to take another presidential plunge, he should jump in on stronger footing than he was able to muster in 2020 — which includes fewer falsehoods about the last election and more focus on the next one.

“I get it, I get it,” said Sen. Lindsey Graham (R-S.C.) of leaders’ concerns about Trump’s presidential campaign disrupting the midterms. “If President Trump is going to run for president again, the sooner he announces the more focused he gets on the future. Talking about comparing and contrasting rather than looking backward, would be the hope.”

Yet with the Jan. 6 committee now in its climactic portions of its investigation, it’s impossible for Republicans to fully ignore Trump’s conduct after he lost to Biden — even if many said in interviews they are barely watching the hearings.

Former aide Cassidy Hutchinson’s explosive testimony last month offered a reminder of the Trump White House’s pervasive dysfunction. The details she offered under oath about the former president’s fury over his loss, throwing food at a wall and shrugging off armed protesters, caught the attention of Republicans beyond the pro-impeachment 17.

“She’s honestly testifying as to what she saw. I don’t know her. And I think she painted the picture of a pretty chaotic situation … But we’re never going to get to hear if there are opposing views. Or maybe [Pat] Cipollone will have opinions on that,” said Sen. Shelley Moore Capito (R-W.Va.), referring to Trump’s former White House counsel.

A Trump spokesperson did not immediately comment for this story.

Even Republicans who voted to convict Trump found Hutchinson’s testimony revelatory. Sen. Mitt Romney (R-Utah) said he was “surprised” to learn about specific Trump actions during the Capitol attack. Yet Romney tempered his firm conclusion about Trump’s failure to live up to the office of the president with an acknowledgment that “the people who love Donald Trump will love him regardless.”

In a brief interview, Minority Leader Mitch McConnell said on Monday he’s not going to comment on the Jan. 6 committee’s testimony “until we get through. And [then] make my observation about it.”

McConnell suggested previously that he would pay close attention to the committee’s work, saying that it’s seeking to find information that “the public needs to know.” But while he’s faulted Trump for the Jan. 6 attack on the Capitol, the Kentuckian has also publicly avoided discussing the former president and helped filibuster a bipartisan commission to investigate the insurrection.

Three GOP senators up for reelection this fall had little to say about Hutchinson’s testimony or its effects on Trump’s political future. Sen. Marco Rubio (R-Fla.) said Trump will “announce when he wants to” while Sen. Ron Johnson (R-Wis.), the most vulnerable GOP incumbent, wouldn’t say whether an early Trump campaign might help him or hurt him. Johnson said “the Jan. 6 committee has not done very good due diligence.”

“I don’t have time to watch the whole thing, you know. I’m getting phone calls: Why I don’t spend more time watching that? People, they must think we just sit around here and watch television,” said Sen. Chuck Grassley (R-Iowa), who said he has only seen pieces of Hutchinson’s testimony while traveling his state.

As to Trump’s future, Grassley said: “I don’t even want to think about the presidential election until after the midterms.”

Hutchinson’s testimony comes as Trump weighs the start of a 2024 campaign that could come within weeks or even days. In interviews, some Senate Republicans appeared resigned that the former president would announce on his own timeline; they argued that the midterm elections would still be defined by inflation and gas prices.

Grassley said he gets no questions about the investigation into Trump at his town hall meetings back home, only about rising prices and the U.S.-Mexico border. And that’s the best fallback Republicans have as they bite their nails ahead of a Trump announcement: the belief that voters have already made up their minds about him, no matter what incendiary new details the select committee reveals.

“He’s withstood a lot of body blows. I’m not sure this changes anything,” said Sen. John Cornyn (R-Texas).

Across the Capitol, Trump’s House allies publicly say they hope he will mount a third presidential bid. But behind the scenes, they fear the bombastic former president — weighed down by Jan. 6 and other controversies — will hurt their chances of reclaiming the White House. The select committee’s hearings have only compounded this view, as millions of people watch damning testimony from witnesses like Hutchinson.

The select panel’s chipping-away at Trump comes as some Republicans begin laying the seeds for their own 2024 campaigns. Sens. Tom Cotton (R-Ark.) and Tim Scott (R-S.C.) have already traveled to early states; Florida Gov. Ron DeSantis is rising in the polls; and Sen. Ted Cruz (R-Texas) has campaigned for candidates at odds with Trump.

Moreover, the Senate GOP is filled with potential rivals or successors to Trump, including Rubio, Cruz, Rick Scott of Florida and Josh Hawley of Missouri. Tim Scott said on Monday he had no comment on Hutchinson’s testimony.

And as for whether Trump should announce a campaign before or after the midterms, the South Carolinian answered the tricky question this way: “Thank God my car is here.”

Olivia Beavers contributed to this report.