MIAMI — Former President Donald Trump held back from criticizing Florida Gov. Ron DeSantis during a rally in Miami on Sunday, saying that DeSantis should be reelected even as 2024 tensions between the two are spilling over into the public.

His pivot came a day after the former president publicly chided DeSantis during a rally in Pennsylvania, calling him “Ron DeSanctimonious.” It was one of the most direct shots yet Trump took at the governor — a likely 2024 rival if both men run for the Republican nomination for president.

It was Trump’s first attempt at branding the Florida governor with one of his well-known nicknames. He did so as a screen behind him displayed poll numbers that Trump claimed showed he had a significant lead over potential 2024 challengers. 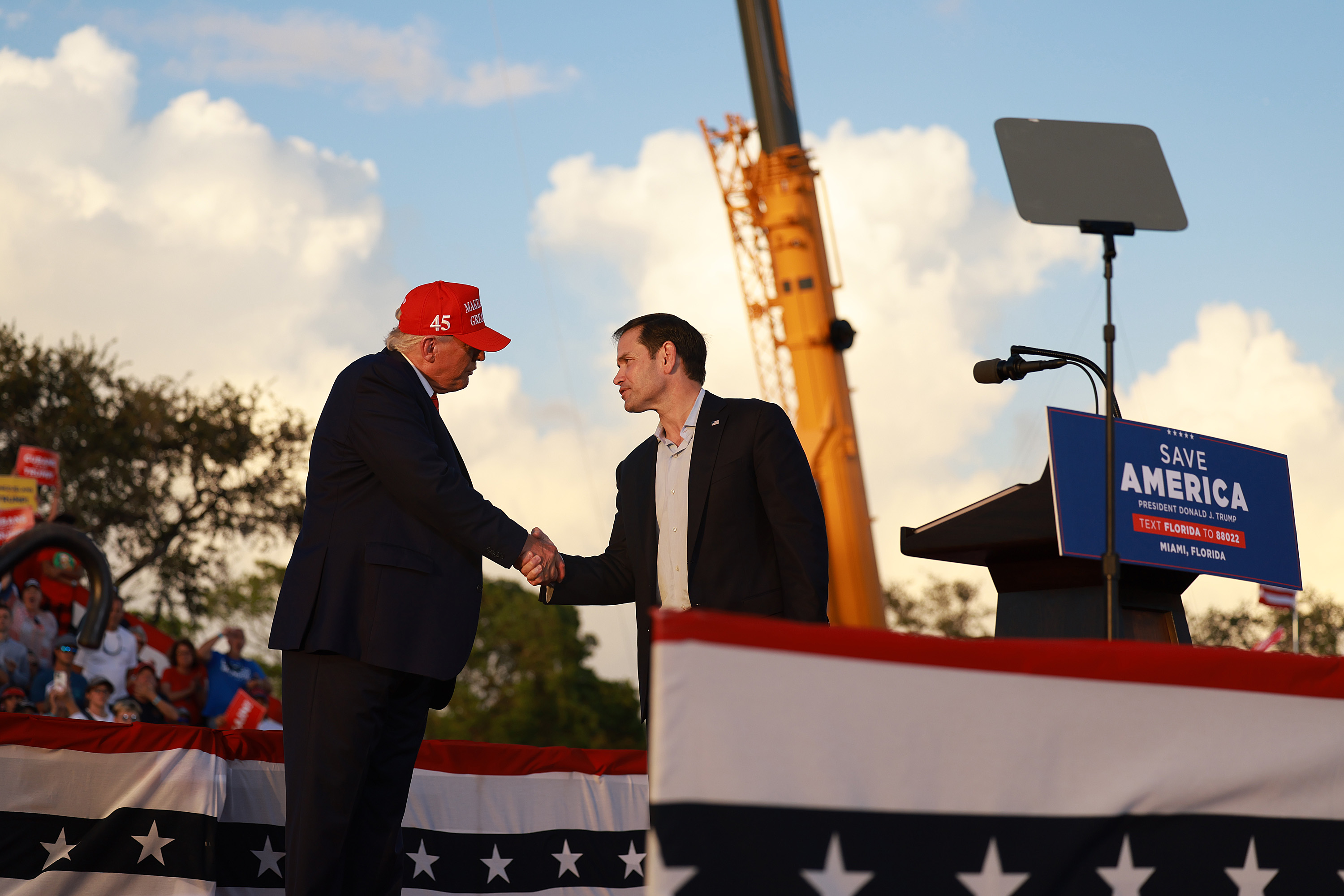 But during a rally in Miami for Sen. Marco Rubio (R-Fla.), who is running for a third term against Rep. Val Demings (D-Fla.), Trump took a much more conciliatory tone.

“You’re going to reelect the wonderful, the great friend of mine Marco Rubio to the United States Senate and you are going to reelect Ron DeSantis as your governor,” Trump said to a packed crowd at the Miami-Dade County fairgrounds.

Trump is widely expected to announce in mid-November that he’s running for president. The move would pit him against DeSantis, who is also expected to run in 2024 and has built a national reputation over the past few years for his handling of Covid-19 in Florida and constant fights with President Joe Biden.

While the two men have mostly held-off publicly criticizing each other, there have been skirmishes in the past few weeks. Beyond tagging DeSantis with a new nickname, Trump used his social media site Truth Social to post a video of former Fox News host Megyn Kelly saying DeSantis can’t “overcome” Trump on a debate stage, and further stoked political intrigue when he did not invite him to the Miami rally.

In Miami, though, Trump gave a speech similar to others he had given. He hammered Biden on immigration, spread unsubstantiated claims that the 2020 election was stolen from him and framed Democrats as extreme in a part of Florida with a large population of residents who fled or had family members flee leftist strongmen in Cuba, Venezuela and Nicaragua.

He also hinted at his likely White House bid, saying he will “probably have to do it again. … Stay tuned.” 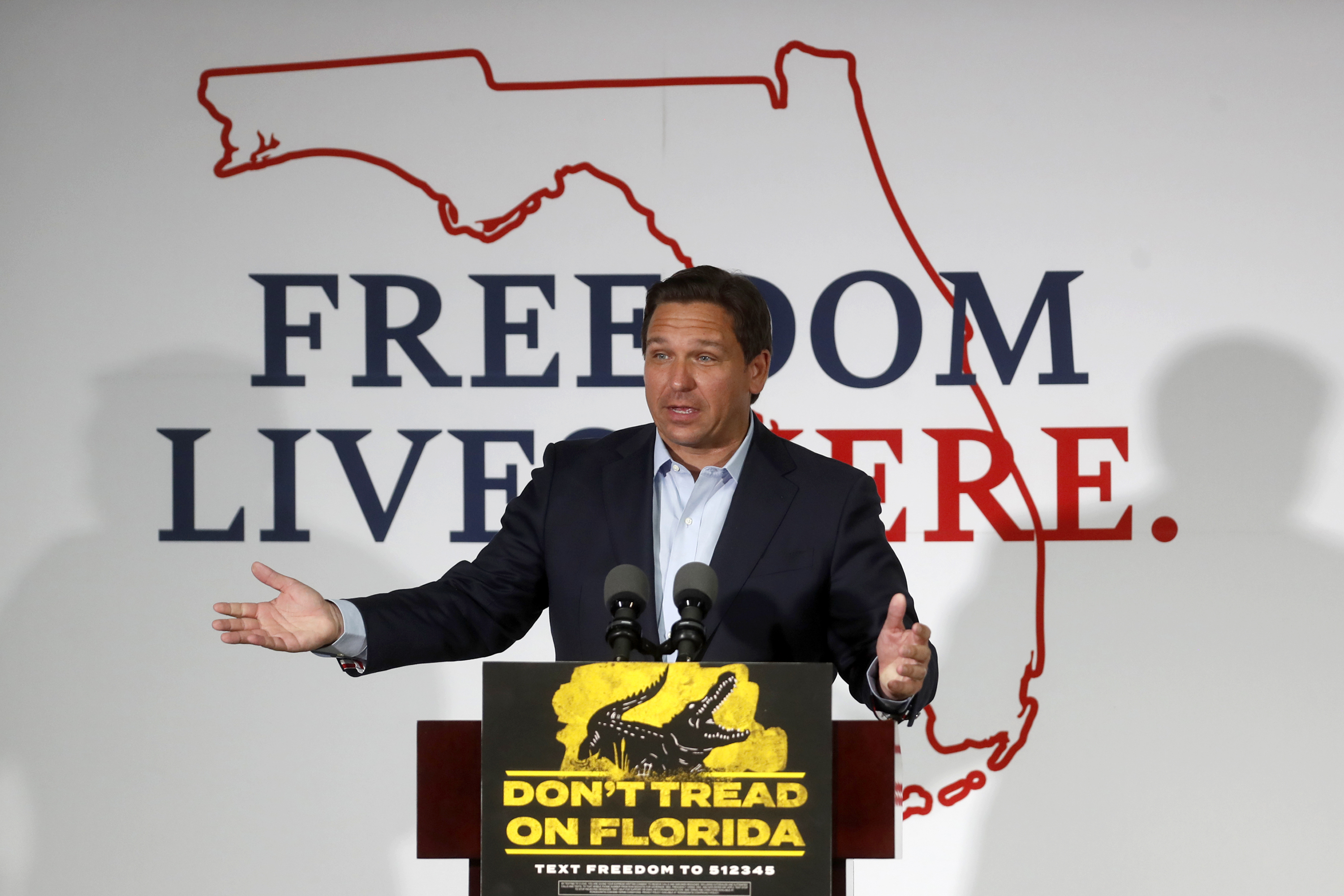 As a long slate of speakers excited the crowd ahead of Trump’s arrival, DeSantis began the first of three separate events as part of his 13-stop tour headed into Election Day. The governor has not publicly lambasted Trump, even as advisers acknowledge they have noticed Trump’s increasing willingness to take jabs at him.

DeSantis stuck to a familiar campaign stump speech in two stops that included denouncing Biden as well as a reminder of his battles over Covid-19 and with Disney over the “Parental Rights in Education” bill, known as the “Don’t Say Gay” bill by its critics.

“Look I have been battling him the whole time,” DeSantis said about Biden. “I have been there since day one, since he got in and we have been fighting our your behalf. Nov. 8 is really the first time that every American gets to go to the polls and just tell Joe Biden what you think of his polices. You can send a loud message on that and I think he needs to hear that.”

While criticizing Biden over immigration, he told the crowd that the federal government needed to reinstate policies such as “remain in Mexico” as well as finish the border wall. He did not mention that these were Trump’s policies, which he has done during some of his previous campaign stops.

The dueling Trump and DeSantis rallies overshadowed a last-minute push by Democrats. Charlie Crist, the Democratic nominee challenging DeSantis, made several stops in South Florida, including a “Souls to the Polls” events designed to try to push voters to the polls on the final day of early voting. Crist has been trailing DeSantis in multiple polls heading into Election Day.

The feud between Trump and DeSantis has forced Florida Republicans to quietly signal which side they may take, even as they try to navigate a seemingly unwinnable situation. State Senate President Wilton Simpson, who is running statewide for Agriculture Commissioner, was on stage with Trump, who had previously endorsed him in his bid for statewide office.

Simpson and DeSantis have had some bad blood in the past, including the governor at one point recruiting a Republican to run against him in the Republican primary. That candidate dropped out after Simpson agreed to have the Florida Senate consider DeSantis-championed congressional redistricting maps after the governor vetoed maps crafted by the state Legislature.

During his brief remarks on stage, Simpson, referring to Trump, said voters need to “return a real conservative fighter to the White House in 2024.” He also called DeSantis “America’s governor,” a common nickname Republicans across the country have started using when referring to DeSantis.

Republican Party of Florida Chair Joe Gruters, who has been a vocal Trump supporter since his days as chair of the head of the Sarasota County Republican Party, attended the Trump rally, and at one point starting a “run Trump, run” chant the crowd eagerly responded to.

The site of the event, Miami-Dade County, is coming with its own set of intrigue during the 2022 midterms. DeSantis and Republicans seem poised to win the longtime Democratic stronghold for the first time in two decades. Most recent polling has DeSantis beating Crist in Miami-Dade and with Hispanic voters, a huge concentration of which live in Miami and the surrounding cities. It’s part of what appears to be a massive red wave building in Florida for Republicans, who now have a 300,000 person registration advantage over Democrats.

As of Sunday morning, Republicans also had a nearly 340,000 vote lead, a massive advantage during a pre-election day period generally won by Democrats ahead of what is typically a big Republican wave on Election Day.

“This is the place where socialism comes to die,” Republican Rep. Mario Diaz Balart told the crowd, which erupted in cheers.