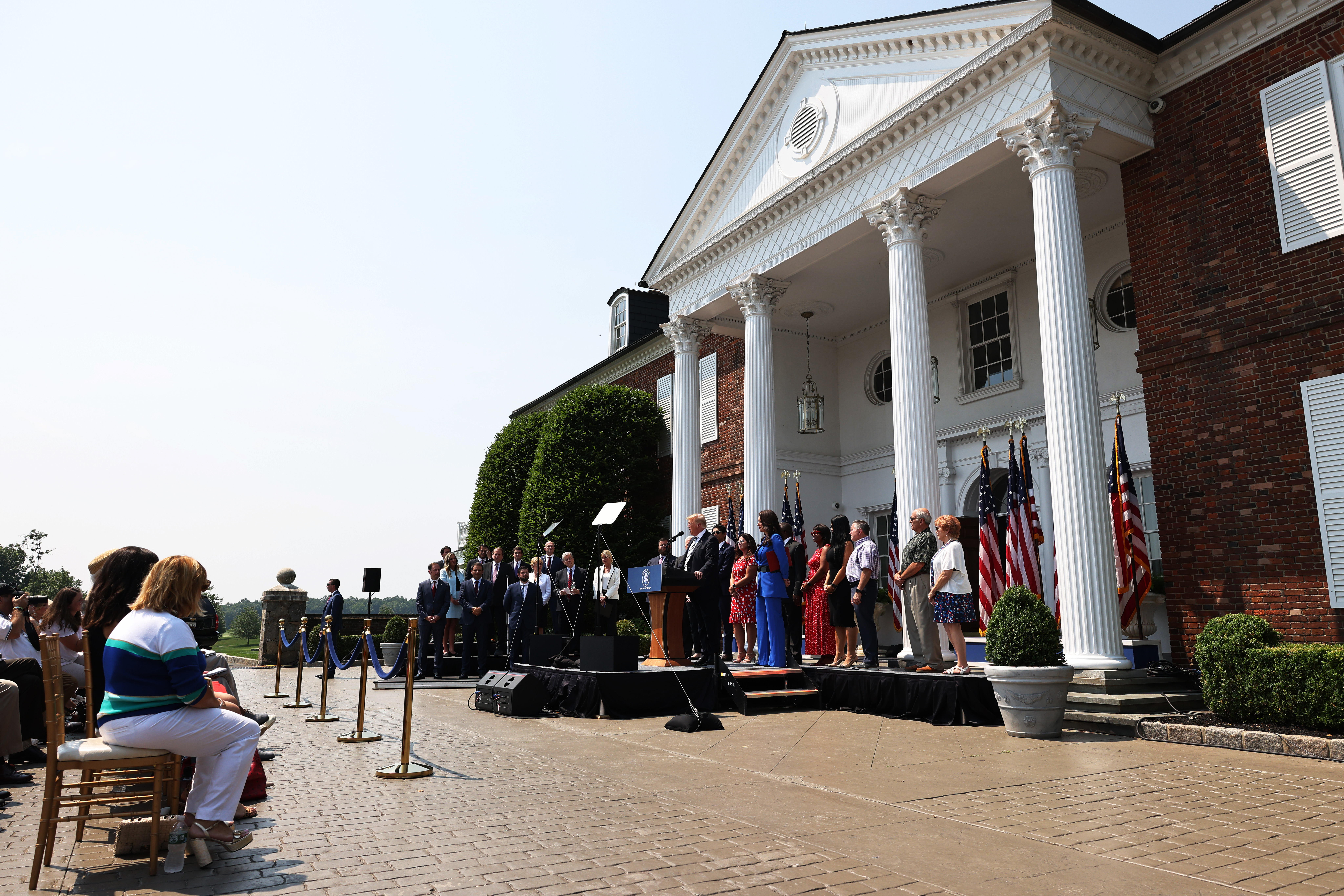 Dozens of family members and survivors of the Sept. 11 terrorist attack will head to former President Donald Trump’s Bedminster golf club next week to protest the controversial Saudi-backed LIV Golf event there.

Brett Eagleson, a founder of the group 9/11 Justice, told POLITICO the group will hold a press conference on Friday morning down the street from the exclusive club. Trump’s Bedminster is the site of the next big event for the Saudi Arabian-funded golf series. And Eagleson’s group hopes to call attention to the Saudi government’s connections to 9/11 and call out the 48-man field heading to the tourney — which includes stars like Bryson DeChambeau, Dustin Johnson and Phil Mickelson — for “choosing to take Saudi payouts and look the other way on the country’s human rights abuses and role in the worst terrorist attacks on American soil.”

According to Eagleson, over a hundred 9/11 victim families and survivors are expected to attend the protest. They will, in addition, have the support of members of Congress like Sen. Richard Blumenthal (D-Conn.), Sen. Bob Menendez (D-N.J.) and Sen. Kirsten Gillibrand (D-N.Y.), though it’s unclear if any lawmaker is able to show up in person.

The protest places yet another unfavorable spotlight on what has become a source of sharp criticism for Trump. His and his family’s ties to the Saudis and his association with LIV has come against the backdrop of a renewed push for the U.S. to more fully distance itself from the country over its human rights record. President Joe Biden himself faced recent criticism for visiting Saudi Arabia after vowing to make the nation a “pariah.”

Trump appears to understand the sensitivity too. Eagleson, whose father, John Bruce Eagleson died in the South Tower on Sept. 11, said a representative for Trump personally called him yesterday in response to a letter his group sent relaying its “deep pain and anger” over the decision to host two different inaugural LIV golf events.

The aide, according to Eagleson, said Trump had read their letter, and told Eagleson “9/11 is really near and dear to him and it’s so important to him he is going to remember everyone who signed the letter and he personally told this individual to reach out.”

But, Eagleson said, it was of “little to no value.”

“My response is, if it was so important to him why did he tell you to call me, why didn’t he call himself?” he added. “[The aide] just kept repeating the same talking points, one being that the contract is binding and there is no way out of it. And when I pressed on when [the contract] was signed, she said she didn’t know and just continued to say that the President was flattered with the letter, which was a weird thing to say, since it was not a very flattering letter. It called him a hypocrite essentially.”

In addition to the letter, 9/11 Justice has also requested a meeting with Trump ahead of the tournament to express their concerns and discuss Saudi Arabia’s role in the 9/11 attacks. The group is particularly focused on showing the public a clear connection between the 9/11 terrorist attacks and the Saudi government. They point to newly declassified documents related to the U.S. government’s investigation of the attacks and suspected official Saudi support for the hijackers as providing clear evidence of the nation’s role that day. Fifteen of the 19 al Qaeda terrorists who hijacked planes on 9/11 were Saudi nationals.

The group’s letter to Trump noted that he himself blamed Saudi Arabia for the attack during a 2016 interview on Fox News.

The Trump Organization did not respond to a request for comment.

The tournament that is set to kick off on Friday at Trump National Golf Course in Bedminster is LIV’s second U.S event. The tour is backed by the Public Investment Fund, Saudi Arabia’s sovereign wealth fund that is chaired by Crown Prince Mohammed bin Salman, who U.S. intel has blamed for the gruesome death of a Washington Post columnist. It has not been without controversy since its inception. Critics of the LIV Invitational Series say it is an attempt by the Saudis to “sports-wash” their record on human rights.

And the golf series has split the golf community too, pitting the PGA against LIV, which is being led by golf legend Greg Norman. Pro golfers who have decided to join LIV — reportedly accepting as much as $200 million in signing bonuses — have been suspended from PGA Tour events, though are still permitted to participate in the four yearly major tournaments.

Trump responded to that ban on Truth Social, and encouraged pro golfers to go ahead and join LIV.

“All of those golfers that remain ‘loyal’ to the very disloyal PGA, in all of its different forms, will pay a big price when the inevitable MERGER with LIV comes, and you get nothing but a big ‘thank you’ from PGA officials who are making Millions of Dollars a year,” Trump said on his social media platform. “If you don’t take the money now, you will get nothing after the merger takes place, and only say how smart the original signees were.”

Trump’s decision to host the LIV series at two of his clubs (Doral in Miami will host the other) comes after the PGA decided days after the Jan. 6 riots on Capitol Hill to terminate an agreement to play the 2022 PGA Championship at Trump Bedminster.

Eagleson said 9/11 families have been “beside ourselves” over Trump’s decision.

“We can’t imagine that the president, knowing what he knows and with his history on this, would host and facilitate the Saudi government have this tournament literally 50 miles from ground zero in a state where 750 were murdered,” said Eagleson.